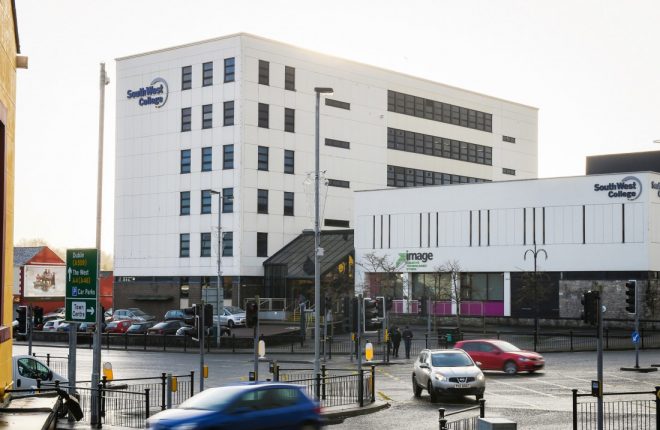 There are plans for the current South West College building in Enniskillen to be converted into a five-floor nightclub when the college moves to its new campus.

THE current South West College campus in Enniskillen is to be transformed into a state-of-the-art “super” nightclub, the Fermanagh Herald can exclusively reveal.
Nightclub guru Barry Dawson, one of the main men behind the famous Cream club in Liverpool and the Creamfields dance festival, is understood to be heavily involved in the plans for the new venue, which will have music over five floors, including space for live bands.
The complex, which will also have a restaurant on the ground floor, is expected to attract some of the biggest names on the dance scene for special events throughout the year. Once up and running, it is also hoped it will attract clubbers from right across the North-west and beyond on a weekly basis, putting Enniskillen firmly on the map for Irish dance lovers.
Last week it was confirmed planning permission had been granted for the South West College’s striking new £25 million campus at the site of the old Erne Hospital.
News of the plans will put to rest much of the speculation regarding what will happen the college’s old main building, which was built in the 1970s in the centre of Enniskillen.
A source suggested that the project could take three years to complete with a spectacular opening event planned to have some of the biggset DJ names in the industry coming along for the night such as Polo Flair, Pete Tong, Carl Cox, Paul Oakenfold, and even Fatboy Slim.