Advertisement
HomeHeadlineBattle lines already drawn for yet another election
Advertisement 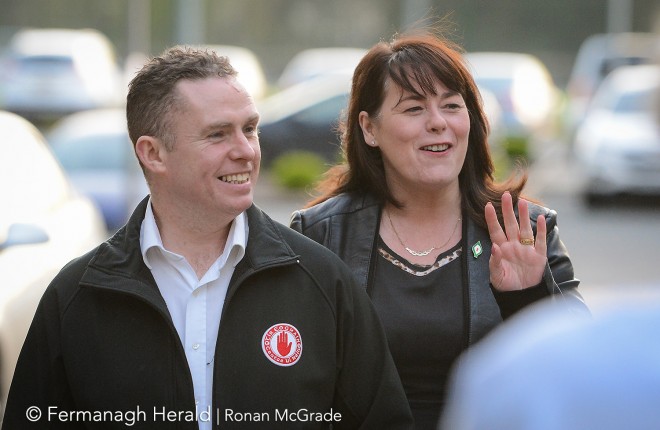 I has yet to be confirmed if former MP Michelle Gildernew, pictured with husband Jimmy Taggart, will be contesting the Westminster election.

THE BATTLE lines are already being drawn hours after Prime Minister Theresa May announced there will be a general election on June 8.
While local Sinn Fein members are meeting today to discuss the selection of a candidate for the election, sitting MP Tom Elliott said he is prepared to do battle to retain his Westminster seat as voters in the North prepare to head to the polls again for the third time in 14 months.
The UUP man was speaking after the British Prime Minister Theresa May announced plans to call a snap general election on 8th June.
Following a Cabinet meeting at Downing Street yesterday (Tuesday), Mrs May said the UK needed “certainty, stability and strong leadership” following last June’s EU referendum on Brexit.
In May 2015, Mr Elliott ended Michelle Gildernew’s 14-year hold on Fermanagh South Tyrone for Sinn Fein by 530 votes in what was arguably the biggest upset of the last general election. Following a unionist pact with the DUP, he was elected on 23,608 votes while Ms Gildernew, who had held the seat since 2001, secured 23,078.
Local Sinn Fein members are due to meet today (Wednesday) to discuss the fielding of candidates ahead of a selection convention after Ms Gildernew stated that the party would be “fighting for the return of this historic seat”.
Speaking from Westminster yesterday, Mr Elliott said the election announcement had taken most MPs by surprise: “In politics you always have to be ready to do battle and I’ll be ready for another one,” he said.
DUP leader Arlene Foster said Mrs May’s decision “provides the people of Northern Ireland with the opportunity to vote for the Union.” Mrs Foster and UUP leader Robin Swann could agree another pact this time around by fielding a single candidate from the two parties.
SDLP man John Coyle finished third in 2015 with 2,372 votes. His party colleague Richie McPhillips, who lost his Assembly seat to Sinn Finn last month, told the Herald yesterday the prospect of him running “was not far from his thoughts” but he would discuss the matter with SDLP colleagues over the coming days.