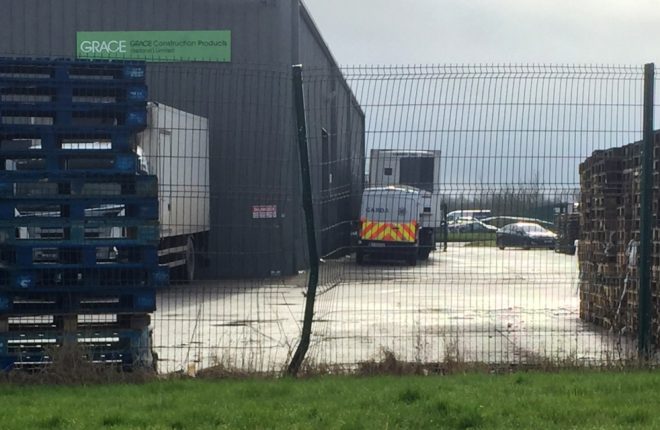 TRIBUTES have been paid to a 53-year-old Roslea man who tragically lost his life in a horrific overnight workplace accident in Co Kildare last week.
The incident happened at around 2.30am last Friday morning at transport company MDS Distribution, based at the Newhall Business Park at Ladytown in Naas.
Tony McDermott, who was working there at the time, suffered catastrophic injuries when he was struck by a reversing articulated truck.
He was pronounced dead at the scene.
An Garda Siochana and officials from the Republic’s Health and Safety Authority are continuing separate investigations into Mr McDermott’s death.
The late Mr McDermott worked as a lorry driver all his life. He had three sons and a daughter who live in the Newtownbutler area but he himself had been living away from Fermanagh for many years.
In a statement, a spokesman for Roslea Shamrocks GFC, with whom he used to play, said:
“It was with great sadness that the club learned this week of the tragic death of former player Tony McDermott.
“Tony’s family has a long association with the club and our sympathies are with his parents Kay and Benny, brother David, his sons and the entire family circle.”
Newtownbutler-based Sinn Fein Cllr Thomas O’Reilly also told the Herald:
“This is an absolute tragedy for his family.
“Tony was a very well-known and likeable man who lived a quiet life and spent a lot of time on the road with his job.
“I wish to convey my deepest sympathies to his wider family circle and friends.”
Mr McDermott is survived by his wife, sons, daughter, parents, brother and extended family.
His remains have been reposing at the home of his parents Benny and Kay at Drumswords, Aughadrumsee ahead of the removal this afternoon (Wednesday) to St Tierney’s Church, Roslea for Funeral Mass at 2pm. Burial immediately afterwards in adjoining cemetery.