Advertisement
HomeHeadlineLocal schools will be caught up in teachers’ strike
Advertisement 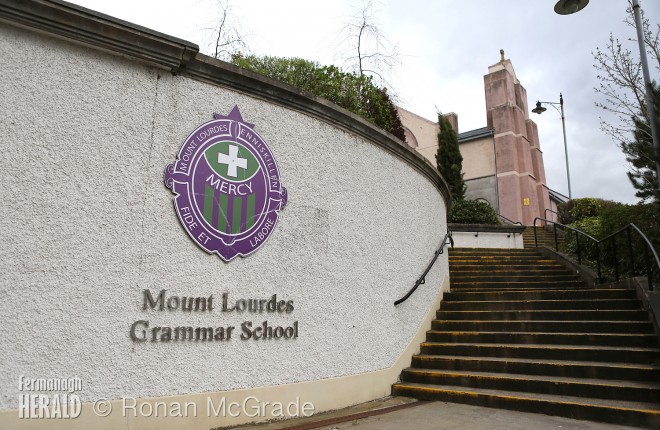 Mount Lourdes Grammar School, Enniskillen is one of the schools affected by the strike

Next week’s latest wave of strike action by teachers will impact on students at over 30 primary and secondary schools in Fermanagh.
Despite the looming election, members of the North’s largest teachers’ union, NASUWT, will take to the picket line next Tuesday, January 31st in a full day dispute over pay, jobs, workload and pensions.
Staff at 19 primary schools and 13 secondary schools in Fermanagh will be taking to the picket line alongside their colleagues from across Tyrone and Derry. It follows similar strike action in schools throughout Belfast and Newtownabbey in November. Some 77 schools were affected then with many having to close completely. Teachers have rejected an offer that would have delivered a 1% rise for this year while rates for 2015/16 would be frozen.
Last Wednesday saw Fermanagh teachers engage in half-day strike action by Irish National Teacher’s Organisation (INTO) members which meant some primary schools staying closed until lunchtime while in secondary schools pupils were under supervision until teachers returned to the classroom once the strike ended at 12.30pm.
Some local schools including Enniskillen Royal, Erne Integrated College, St Joseph’s College and Mount Lourdes have confirmed that they will be closed to students next Tuesday due to the industrial action. A spokesman for Mount Lourdes said: “Due to the number of staff on strike we will be unable to operate the timetable as normal. As a consequence the school will be closed for students on Tuesday.”
Other schools including Devenish College and St Eugene’s said a final decision had yet to be made. Malachy McConnell, Acting Principal at St Eugene’s told the Herald: “The picture will become clearer towards the end of the week but parents have been alerted to the likelihood of industrial action.”
Outgoing Education Minister Peter Weir has criticised the strikes and claims his department’s budget is under severe pressure. Teaching employers have also expressed serious disappointment with the plan to engage in further strike action over teachers’ pay.
Justin McCamphill, the North’s NASUWT National Official says members are committed and dedicated teachers and regret any disruption to pupils and parents.
“Parents will also recognise that unless teachers are recognised and rewarded as highly-skilled professionals and have working conditions which free them to focus on teaching and learning, there will be a long-term detrimental impact on the quality of education provision for their children,” he added.