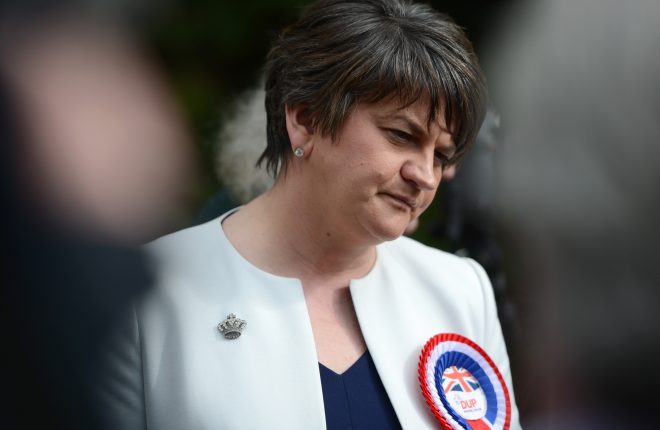 DUP leader Arlene Foster says she intends to remain on in her role as First Minister “in 2017 and well beyond” and is “determined that the truth will get out” in relation to the Renewable Heat Incentive (RHI) scandal.
Mrs Foster was speaking exclusively to the Fermanagh Herald following Monday’s failed vote of no confidence in a day of high drama at Stormont and amid calls to stand aside as an independent investigation is launched. Her comments also came amid a poll of Herald readers on whether or not Mrs Foster should stay in her post or go. Sixty five per cent of respondents voted in favour of her going while 35 per cent said she should stay.
Despite losing a vote of confidence in the Assembly over the RHI scandal, she remains in post as the motion brought forward by the SDLP did not have sufficient cross-community support. Sinn Fein did not participate in the vote but say they will bring forward a further motion when the Assembly reconvenes on January 16th.
Speaking on Monday night after the day’s dramatic events, the First Minister told the Herald: “The events of this past few weeks have caused many people in Fermanagh to worry about the future of our Government and the accountability of the institutions that we fought so hard to establish. I want to assure my constituents that I intend to remain as First Minister in 2017, and well beyond.”
Mrs Foster, who marked one year as DUP leader last Saturday, says she “will not fall at the hurdles that have been set by those who are intent on playing party politics”.
She added: “I am open to be questioned both publicly and through an independent investigation, as it is important that those who elected me as their MLA are fully aware of the facts of this matter.
Looking ahead to 2017, Mrs Foster said her “vision for a vibrant and sustainable Fermanagh remains” and she thanked “the many who have offered their support”.
“There has been much misrepresentation and spin since this matter came to the public attention but I am determined that the truth will get out and I have absolutely nothing to fear in that respect. My integrity has been attacked by the UUP and the SDLP but they don’t choose the political leadership of this country. The people do and they have tried to subvert the will of the people. I intend to fight the good fight, keep the faith and finish the race.”