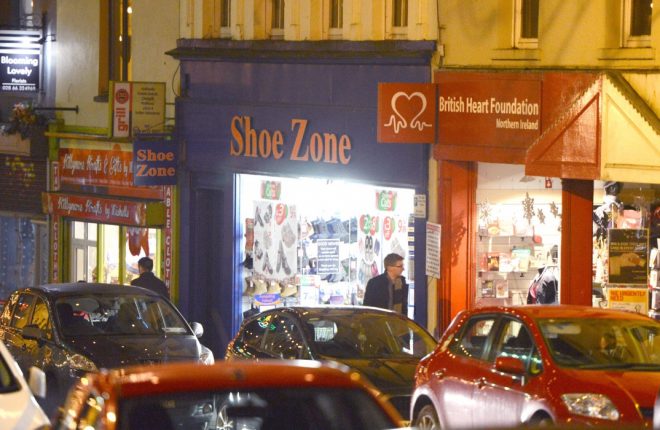 Shoe Zone on Townhall Street in Enniskillen was targeted on Sunday afternoon.

Three females from Sligo appeared before Enniskillen Magistrates Court on Monday, charged in connection with a weekend theft from a local shoe shop.
Ann Marie Ward (32), from Glendallon in Sligo; Margaret Philomena Ward (29) from Parklands Crescent in Tubercurry and a third female aged 17, who cannot be named because of her age are charged with the theft of five pairs of shoes worth a combined total of £179.89 from Shoe Zone on Townhall Street in Enniskillen on Sunday afternoon. Ann Marie Ward was also arrested on Sunday on foot of an outstanding bench warrant.
The court heard that a member of staff reported the suspected theft to police immediately and gave good descriptions of the three females who had attended the premises, accompanied by three children. Police on routine patrol at Church Street in the town later arrested the three females, one of whom the court heard is pregnant, after recognising them from the descriptions. A Toyota van was also searched and in which further items, also believed to have been stolen, were recovered.
Defence solicitor Garry Smyth said two of his clients had protested their innocence when questioned by police while a third gave a no comment interview. The court heard that while futher enquries have to be made, police had agreed to grant bail to all three defendants on foot of an £800 surety and on condition that they do not enter Shoe Zone in Enniskillen.
The minor was released on £50 bail and £100 surety while the two co-defendants were each handed a £500 bail bond and £200 surety. All three were remanded to appear in court again on January 16th.
In a statement, PSNI Sergeant Joanne Laird said of the arrests: “This is an excellent example of retailers and police working together. Thanks to the crime being reported straight after the incident and good descriptions being given, we as a police service were able to make the subsequent arrests.”