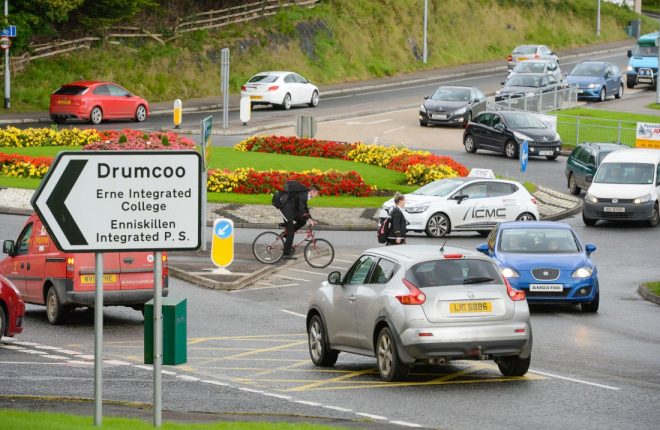 There is just one lollipop person left in Enniskillen, while Omagh has 13 and Dungannon a staggering 18! That’s according to MLA Rosemary Barton who says the scarcity of school crossing patrol officers is unacceptable.

The Ulster Unionist MLA asked the Minister of Education to detail the number of school crossing patrol officers employed in the three towns. Following the response, Rosemary Barton has expressed her concern that there is only one school crossing patrol officer in Enniskillen.
The MLA for Fermanagh and South Tyrone said: “Given that so many parents have raised issues regarding school crossings with me, it is of grave concern that there is currently only one school crossing patrol officer in Enniskillen.
Rosemary Barton highlighted the crossing at Cherrymount Roundabout, Enniskillen near Erne Integrated College, where two students were knocked down in October. Most recently, a student was knocked down outside St Aidan’s High School, Derrylin. These incidents highlight the need for more officers in the county.
“Of particular concern is the crossing towards Erne Integrated College from Donnelly’s Garage.
Indeed, there are a number of other places which would greatly benefit from a crossing patrol officer and I would suggest that this is a major safety issue for our children which must be addressed immediately.”
St Ninnidh’s Primary School, Derrylin which is situated on the Fermanagh to Dublin road previously had a school crossing patrol officer, but has since lost the service. Principal Gavin O’Reilly is disappointed at the numbers of employed officers in the county town.
“When we were in the old school, we had one and it was taken away since moving to the new school. This is cutbacks, and the children suffer. We are on the main route between Fermanagh and Dublin, and it is an extremely busy road. Over 20 years ago, there was a child killed outside our school, and it is a worry. I am fully in favour of having officers, and I think that them being taken away was one of the biggest mistakes that was ever made.”
In a similar situation across the Cavan border, Butlersbridge National School has recently been given €22,000 from the Action Plan for Rural Development to provide a pedestrian crossing and related safety measures. The school is located on the busy N54 road.