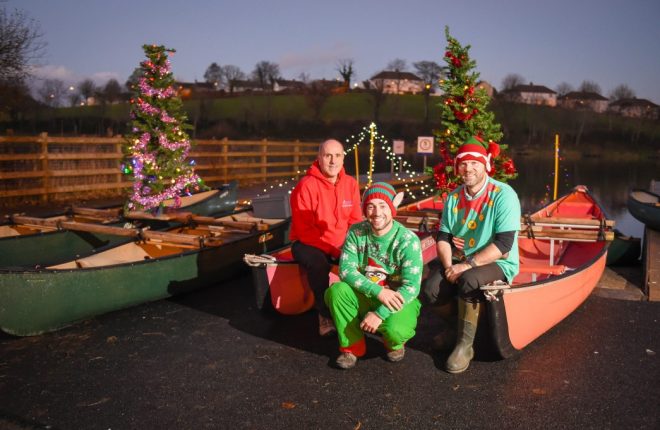 ALL SET…Mark Rogers, Marcus Mundy and Gordon Thompson of Erne Padders get ready to paddle their festive canoes around the island of Enniskillen, setting off from the Round O

IF you’re out shopping in Enniskillen this Saturday evening, keep an eye out for a very special flotilla on the River Erne.
Each year, weather permitting, the children from Roscor Youth Village load their canoes with Christmas trees and twinkling lights then sail around the island town while singing festive carols for the three Saturdays before Christmas.
The young people have already been out on the water around the town over the past two weeks, entertaining shoppers and having a old-fashioned good time, even meeting the big man himself, Santa Claus, who greeted them as they completed their evening canoe.
Mark Rogers, manager of the youth village that is run by charity Extern who work supporting young people and their families, said over the past few weeks they had also been hosting their Christmas parties and dinner on Saturdays, finishing the days off with their Enniskillen canoe event.
“We be do the canoe now over the three weekends,” he said, adding the children ranged in age from eight to 14. “All the young people at the youth village take part, and we have our Christmas dinners before coming into Enniskillen around half four on the Saturday.
“We have the Canadian canoes and we start at the Round O, going up around Queen Elizabeth Road, up to the East Bridge where we’ll bob around, and then paddle around the town down past the Forum.
“Santa then makes an appearance at the end, and is there to meet the children and giving them selection boxes.”
He added: “The children all wear Santa hats, and have Christmas trees, lights, the whole works, on the canoes and will be singing carols. Each week we have 50 kids and staff, and there are around 10 or 12 on each canoe.
“We always get a good response going up Queen Elizabeth Road, with people beep their car horns and so one.”
Mr Rogers said they had been doing the event for around four years now, however had been it had been cancelled last year due to the atrocious weather last December. Luckily, this year the weather has been a lot kinder and the children have been having a great time. They will have their fingers crossed for similar conditions for their third and final outing this weekend.
“The whole idea is about building memories for the kids,” he said, explaining the children who attended the youth village came from a range of family situations. “We know some of the kids might not have a great Christmas, so we want to feed into their memory bank.
“It started off as just one of those crazy notions. We wanted to do something different, and the kids like doing things on the water. It’s something they will certainly remember.”
So, if you’re around Enniskillen at about half four over the this Saturday, keep an eye out for the kids from Roscor and make sure to give them a cheer of support.