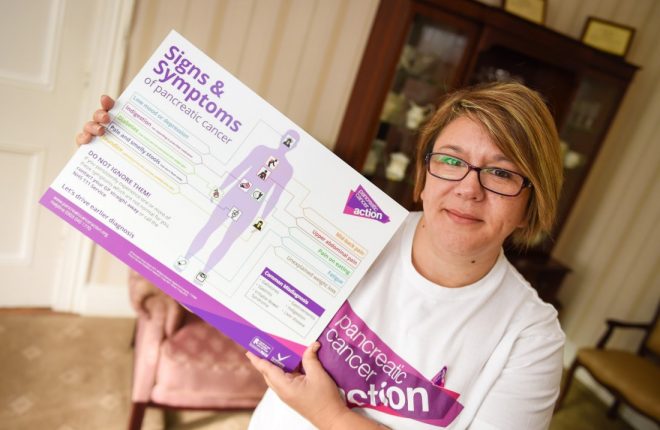 THE wife of a Fermanagh man who sadly passed away as a result of pancreatic cancer has been continuing her brave quest to help prevent others suffering the same heartache, and has helped organise a special service in Enniskillen this evening.

To mark World Pancreatic Awareness Day, which falls today, November 17, there will be a special cross-denominational service at St Macartin’s Cathedral in Enniskillen.
The event has been organised by the Action4Noel, a campaign group set up by Kerry Irvine, the wife of the late Noel Irvine from Kesh, under Pancreatic Cancer Action (PCA). It is the biggest of many events organised by Action4Noel organised for November, which is pancreatic cancer awareness month.
Already, the group jointly hosted an information event at the Long Gallery in Stormont earlier this month, in which patients and their families had the chance to meet with their MLAs and let them know first hand the issues they were facing. It was an even bigger event than a similar function held by Action4Noel at Stormont two years ago. Fermanagh and Omagh District Council also lit up Enniskillen Castle purple last night.
Speaking ahead of the Enniskillen service, which will feature music by Justin McGurk, Kerry said: “The ethos of the service is of a celebration of life, and of remembrance.
“One of the speakers will be Ivan McMinn, who is speaking because he is celebrating six years of survival and is in remission at the moment.
“His story is one we’ll be hoping to hear more of. Ivan is our beacon of hope.”
Ivan’s pancreatic cancer story is, sadly, not uncommon, however, and it is for that reason Kerry and those involved with Action4Noel are campaigning so passionately for greater awareness and research into the disease, which has a very low survival rate due to difficulties diagnosing it as well as a lack of research into treatments.
Noel Irvine passed away in November 2011, making the month all the more poignant for Kerry and their two children. In November 2014, Kerry began the Action4Noel campaign, and has since raised tens of thousands of pounds through various imaginative fundraising events.
Kerry said while this year they are focusing on raising awareness of the symptoms of the disease, during the awareness month, Action4Noel also raise funds for research.
Aside from the Long Gallery event, and the upcoming cathedral service, Kerry said there was plenty more exciting things happening this week, including the lighting up of various buildings purple, such Stormont buildings.
“We’ll be holding smaller events, such as coffee mornings, there’s plenty happening” she said. “We’re also asking people to ‘turn it purple’ this month, and have various business and youth clubs on board. We’re hoping to get as many people and businesses involved as possible.”
Kerry said this could involve anything from as big as lighting up your business to simply wearing purple for a day.
To find out more about ‘turning it purple’, or about the cathedral service, which begins at 7.30pm tonight, contact Action4Noel on 82247317 or 07725477630, or visit them on Facebook or Twitter.