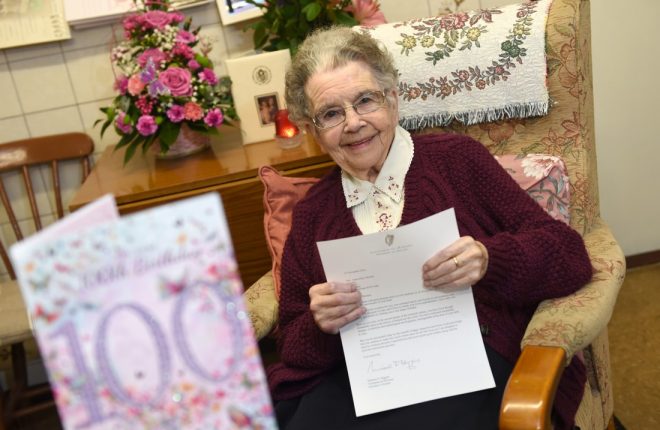 FONDLY REMEMBERED…Anna Drumm, pictured holding a letter she received from the Irish President Michael D Higgins on her 100th birthday, passed away recently at the age of 101

The people of Derrylin bid a sad farewell to their oldest resident this week following the death of Anna Drumm, just a fortnight before she was due to celebrate her 102nd birthday.
Mrs Drumm passed away peacefully at her home at Garvary, Teemore on Saturday.
Despite being confined to her home for the last five years, she remained alert to the end and always looked forward to people calling.
Born Anna Murray in November 1914 in Lisnaskea, by the time she met her late husband, Johnny, a farmer, she had worked as a priest’s housekeeper in Belfast. In that role, she mastered all the skills needed to rear her family of four sons John (Veronica), Dublin; Michael (Geraldine), Garvery; Patsy, Derrylin and Gerry (Kathleen), Dublin.
Her late husband, Johnny was from Aghindisert, the neighbouring townland where Anna’s two sisters, Eileen and Philomena Murray live and who were devoted to her care. She was predeceased by her son John in March of this year.
Rounding off the family circle are her eight grandchildren and five great grandchildren.
She was previously a regular attender at bingo in Derrylin and would go into Derrylin to get her hair done. She was also interested in books and newspapers as well as the TV and radio.
Her good friend and local parish priest, Fr Fintan McKiernan, PP Derrylin/Teemore, led the tributes at her funeral this week.
“Anna was a woman of sound mind right up until her final hours. She was always a happy person and had a great sense of humour. She will be remembered as a great conversationalist and always a very interesting person to talk to. She was always so delighted to see you when you visited her and you always went away feeling better.
“Anna wasn’t living in the past and very much kept with life, which was unusual for an elderly person. In particular, she always took a great interest in the progress of her grandchildren and what they were up to.”
The late Mrs Drumm was laid to rest on Monday following Funeral Mass at St Mary’s Church, Teemore.