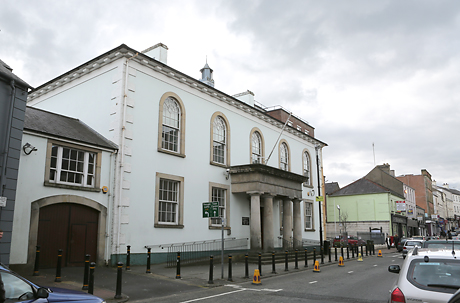 A 59-year-old man was detected entering an off-licence and subsequently arrested for drink driving as he made his way to hospital, Enniskillen Magistrates Court heard on Monday.
The court was told that police received a report of a suspected drink driver on the Sligo Road, Enniskillen at 6.30am on September 10th.
The car, being driven by Charles McHugh, was observed driving erratically and mounting the kerb before he pulled in at the Village Inn Off Sales, parked his car and entered the premises. Police attended the scene and noted that McHugh appeared to have difficulty walking and was unsteady on his feet.
When they approached to speak to him, they also detected that he was smelled of intoxicating liquor and his speech was slurred. He agreed to take a preliminary breath test, which he failed. After McHugh was arrested on suspicion of drink-driving, the defendant was conveyed into custody.
A further evidential test returned a reading of 110g micrograms of alcohol in 100ml of breath – 30 micrograms in excess of the legal limit. McHugh of Barran, Blacklion in Cavan was charged with driving with excess alcohol in his blood.
Defence solicitor Myles McManus said his client had been feeling unwell and had been making his way to hospital at the time of his detection. Mr McManus noted that his client was taken to hospital following his release from custody for treatment.
“My client lives with his 92-year-old mother who relies on him. He has a clear record and has been driving since 1979. He has a difficulty with alcohol but is attending counselling for this and has abstained from alcohol since this incident,” Mr McManus added.
District Judge Nigel Broderick said that while he would give McHugh credit for his early plea and clear record, the manner of his driving had been erratic as he mounted the kerb and observed that there had to be a disqualification.
“If there had been a pedestrian on the kerb at the time, they could have been seriously injured. It does beggar belief why people continue to drink and drive, thereby putting members of the public at risk,” the judge added.
McHugh was fined £300 and banned from driving for 14 months. Mr Broderick also certified the defendant as a suitable candidate for the drink-driving course. Upon successful completion of the course, McHugh will be eligible for a discount of up to 25 per cent on his ban.