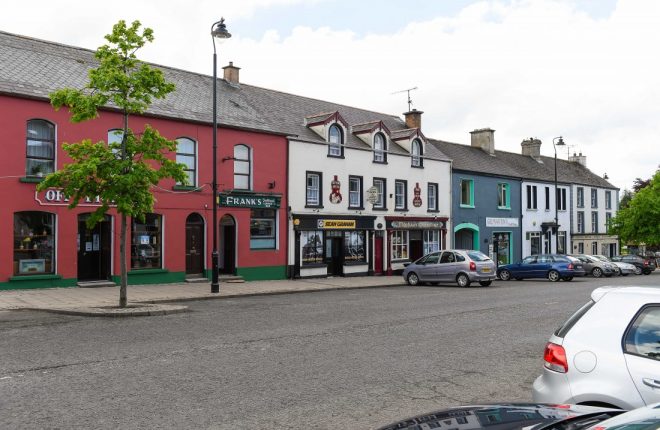 Before the accident, the defendant had been drinking in McMorrow’s Bar in Belleek

A BELLEEK man was found in a hen house after taking his neighbour’s car to go to the pub resulting in a collision with another car, Enniskillen Magistrates Court heard on Monday.
William Armstrong (52) pleaded guilty to eight charges in relation to the incident which occcured on May 17th this year. At 7.50pm on the date in question, police received a report of an accident involving a Volkswagen Golf being driven by the defendant and an Audi A5 which was being driven by a female.
The court heard that Armstrong had taken the vehicle which belonged to his neighbour without permission and drove it to McMorrow’s Bar in Belleek where he consumed three and a half pints. The defendant was on his way home from the pub when he collided with the Audi at Main Street in Belleek before leaving the scene of the accident.
He was located a short time later in the hen shed of a farmyard and found to be unsteady of his feet while the damaged Golf was also discovered. An evidential breath sample from the man showed that he had a reading of 133 micrograms of alcohol in 100ml of breath, almost four times over the legal limit.
Armstrong of Cornahaltie Road in Belleek was charged with driving while unfit; failing to remain, report and stop where an accident occurred, having no driving licence or insurance, drink driving and unlawfully taking a vehicle.
Defence solicitor Reggie Ferguson said his client was a part-time farmer who lived alone three miles from Belleek. Mr Ferguson added that Armstrong has a significant problem with alcohol and had not held a driving licence for two years.
“He has a neighbour who normally takes him to get groceries in Belleek and whose car he admitted to taking without consent on this occasion. He had gone to his neighbour’s house, who wasn’t at home, and saw the car and keys.
“In a rash moment, he decided to drive the car to Belleek to do his shopping and then went to the pub before deciding to return home when the accident occurred.”
Mr Ferguson added that Armstrong’s judgement had been clouded at the time and acknowledged that the alcohol reading was dangerously high.
“He expresses his regret to the owner of the Audi and his neighbour over what happened. This was out of character and something that has brought shame on him. He bitterly regrets what happened and accepts the consequences.”
Addressing Armstrong, District Judge Nigel Broderick said: “This is a very serious matter because you had far too much alcohol in your system, four times the legal limit and drove not an inconsequential distance before hitting the other vehicle.”
He added: “If you had injured or, God forbid, killed someone you would be standing before a judge and jury today facing prison.”
Armstrong was sentenced to four months imprisonment suspended for two years for driving while unfit and taking the vehicle without consent. He was also disqualified for two and a half years until retested and fined a total of £250 in relation to the other charges. The judge also ordered that compensation of £300 be paid to the owner of the Golf and £200 to the Audi owner.