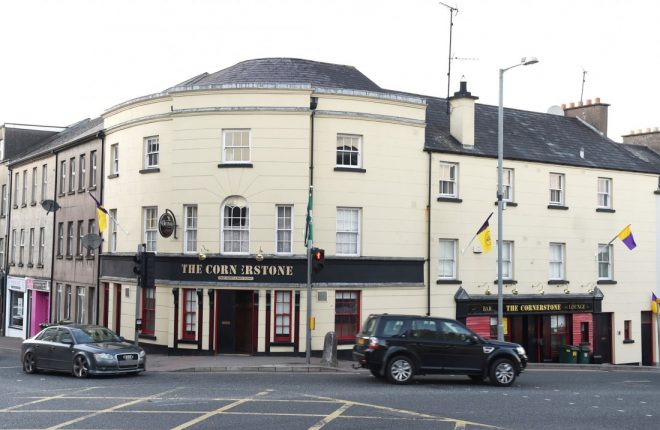 The Cornerstone Bar in Enniskillen

A BELLEEK man who was found guilty of drink driving after a traffic warden ordered him to move his van a short distance then reported him to police has been disqualified for three-and-a-half years.
Shane McGarrigle (31) of Toura Road, Farrancassidy, Belleek pleaded guilty to being drunk in charge of a vehicle at Enniskillen Magistrates Court last Wednesday, but contested a charge of drink driving.
The court heard McGarrigle had been working night shift in Dublin and had arrived in Enniskillen on the afternoon of Friday, April 15 this year, and went to the Cornerstore Bar while he waiting on his girlfriend to collect him when she finished work.
Giving evidence, a local traffic warden said that around 3.15pm he observed a silver Ford Connect van parked on a double yellow line outside the bar. He then saw McGarrigle coming out of the bar, walking to the van, and he then told him he had to move it.
The defendant returned to the bar to get his keys, then went back into get his wallet, then he came back out and moved the van down the street to Lakeland Service Station.
The traffic warden, who was a retired policeman, said he noticed McGarrigle’s speech was slurred and he said he could smell alcohol from him at the time, so he went and informed police in the station, located a short distance past the petrol station.
Defence barrister Heather Phillips pointed out the warden had previously told police the van was parked on a single yellow line, and that McGarrigle had been walking away from the van when the warden told him it had to be moved.
A statement from a police officer was then read to court, which stated they tasked to respond to a suspected drink driver at the Lakeside Service Station and when they approached McGarrigle it took him approximately 30 seconds to comply with rolling down his window.
The officer said McGarrigle had a pint glass containing  a clear dark liquid with ice cubes in the car, and it was running. The officers noted that when he got out of the van, McGarrigle was unsteady on his feet and his speech was slurred.
When arrested and taken to the station, McGarrigle returned an evidential reading of 94 micrograms per 100ml breath. The drink driving limit is 35 micrograms.
Giving evidence, McGarrigle said he had gone to the Cornerstore Bar at around 2.30pm to wait for his girlfriend after travelling from Dublin, and said he didn’t start drinking until after she had texted and confirmed she would pick him up when she finished work at 4.30pm.
He said he said he had only been drinking soft drinks when someone came into the bar and said it looked like someone was getting a ticket on a van outside, and he went out to check if it was his van, which he said he thought was OK because it was parked on a single yellow line.
McGarrigle said he moved his van, approximately 50m, and then returned to the bar and started drinking. He then noticed his phone needed charged and said he walked down to his van to plug it in, explaining the engine had to be running to charge the phone.
When asked how much he had to drink in the time between moving the van and charging his phone, which the court determined would have been approximately 15 minutes, McGarrigle said he’d had three double whiskeys and a pint of beer. He said he’d worked hard all week and felt he deserved a treat.
District Judge Nigel Broderick said McGarrigle’s high reading was “not without significance” and added he did not believe the defendant’s evidence, but did accept the evidence from the traffic warden and police.
Judge Broderick said McGarrigle’s high reading, the fact he had a previous drink driving conviction from 2010, and the fact he had contested the case meant he could not give him credit when sentencing him. He disqualified McGarrigle for a total of three-and-half years, until retested, and fined him a total of £400 for both charges.