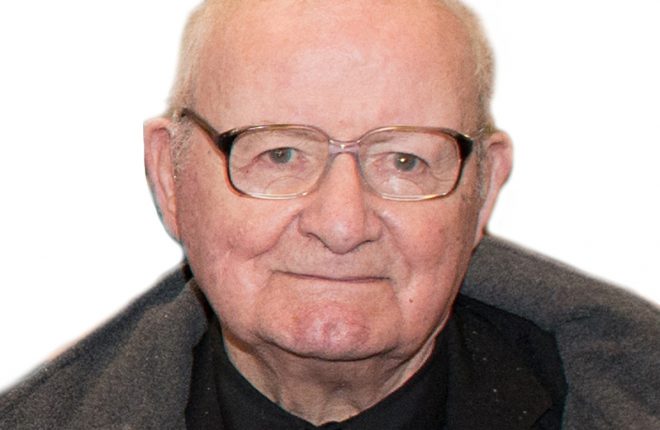 WARM tributes have been paid to the Very Rev Canon Thomas Marron who died peacefully early yesterday morning (Tuesday) at the South West Acute Hospital, Enniskillen.
Canon Tom, who was 89, had served as Pastor Emeritus at St Macartan’s Church in Trillick following his retirement in 2002.
A native of Corduff in the parish of Carrickmacross in Co Monaghan, Fr Tom was ordained in St Patrick’s College, Maynooth in June 1952 and served as curate in Ederney for seven years. He then moved to another curacy at Errigal Truagh (Carrickroe) from 1959-1971 followed by another eleven years in Roslea (Magherarney). For 20 years, he served as Parish Priest in Tempo (Pobal) and was appointed to the Diocesan Chapter of Canons in 1997.
A keen sportsman, he trained camogie teams and was a regular face on the  sidelines, always travelling to local GAA matches with a car full of fellow supporters.
His successor in Tempo, Fr John Halton PP told the Herald yesterday: “For 14 years, he enjoyed his retirement among the community in Trillick who responded to his kindness and good nature with great generosity and we thank Canon John McKenna PE for taking good care of him.
“Canon Tom served here in Pobal parish for 20 years and was the heart and soul of this community. He was very much a man of the people and wasn’t long in the parish before he amazed everyone by knowing every adult and child by name.
“A man of great compassion and sensitivity, Canon Tom’s work among the sick, hospitalised or those who were down on the world is legendary. He made himself available day or night to those in need and always with an encouraging word.”
Chairman of Fermanagh and Omagh District Council, Councillor Mary Garrity from Trillick said the late priest was highly regarded in his former parish.
“Despite his great age, his death has taken us all by surprise. Both myself and my father used to take Canon Tom around the parish on the first Friday of the month to visit the sick. It’s strangely ironic that we are losing him in the same week as we gain a new priest in the parish with the arrival of Fr Padraig McKenna who will be installed this weekend. Canon Tom was a true gentleman and great sportsman who will be sadly missed in both Tempo and Trillick.”
Canon Tom’s remains are reposing at the Church of the Immaculate Conception, Tempo today (Wednesday) and tomorrow (Thursday) from 8am until 8.30pm for those who wish to pay their respects. Prayers will be offered at 12 noon each day and Mass will be celebrated at 7pm every evening. His Funeral Mass will be celebrated at 12 noon on Friday followed by burial at the local cemetery.