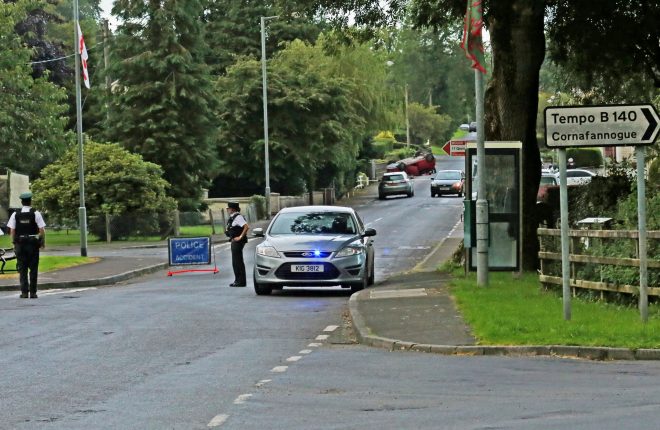 The funeral takes place this lunchtime of Edward McConnell who died following a road accident in Lisbellaw on Monday evening. The 37-year-old, who was unmarried, died just yards from the home he shared with his elderly mother Deborah in Fortview Park. It’s understood that he had been helping his mother to put on doors earlier in the day when he complained of feeling unwell and went to the doctor.
He was on his way home from the pharmacy when he became ill behind the wheel. His red Volkswagen Golf hit a kerb and flipped over at around 5pm. Emergency services who attended the scene were unable to save his life.
His death is the second tragedy to hit the McConnell family within the past year. His father, also named Edward, died suddenly last November. Both father and son had worked as gardeners at Lord and Lady Anthony Hamilton’s home at Killyreagh House in Tamlaght. Mr McConnell Jr is survived by his mother and two sisters Anne and Jean.
Mr McConnell’s Funeral Service will be held in his home at 1pm today with interment afterwards in Lisbellaw Presbyterian Churchyard. Ahead of his funeral, police have renewed their appeal for witnesses. Officers are appealing for anyone who was in the area at the time and who witnessed the collision to contact them. They are particularly keen to speak with the driver and occupants of a silver coloured car that is described as having a loud exhaust and containing three young males that was seen in the Tattymacall Road/Fortview Park area shortly before the collision.
Witnesses can contact local officers in Enniskillen or the Collision Investigation Unit by calling 101.