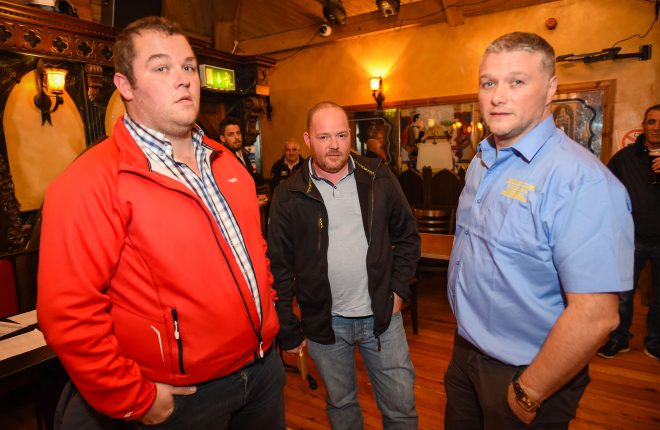 Eamonn Garrity, Gareth McManus and Brian Coalter are concerned about the impact of the new taxi metres on their business RMG77

TAXI drivers here have come together as one ahead of the new legislation on taxi meters which comes into effect next week.
The new laws will see an automatic rise in fares for passengers, but the new association, Enniskillen and Surrounding Areas Taxi Association, is taking a coordinated approach to keep fare increases to a minimum and improve their efficiency as a group.
From October 1 it will be a legal requirement for all taxis to have an approved taximeter and printer fitted that will be tested and sealed by the DVA.
There is minimum tariff rate with the fare increasing for unsociable hours such as weekends and bank holidays with a further special rate for Christmas and New Year.
Another major change will be waiting time and traffic congestion charges when the meter is running.
The taxi group had its first meeting in Enniskillen on Monday evening with a 75 per cent turnout.
Eamonn Garrity of Star Taxis, in Enniskillen, explained,” It was a great start, but we’re looking to have 100 per cent representation in the next few weeks. We want everyone on board.”
“We’ve come together to continue and improve on the best service to our customers.”
The customers will see an increase in price during unsociable hours and at times when there is heavy traffic, but the new association wants to educate customers to use the taxi at less busy times and not get charged for getting caught in traffic.
The national tariff is £3 during the day, moving up to £1.60 a mile after the first half mile. However, Enniskillen tariffs will be slightly cheaper.
“There is no such thing as competition here. It’s everyone charging the same price. Your competition is your service now. We’re all singing off the same hymn sheet,” he said.
“We want to be together on fares, problems etc so that we can get things sorted out together,” he said. “This just isn’t to do with pricing. It’s from buying a product that we need for the car or problems we’re going to work as one body.”
“It’s very hard times for us and we’re investing a lot of money in this. That’s why we have to get the committee set up so that we’re all on the same sheet. It’s going to be a test for the public for a while, but they’ll find there may not be that much of an increase in their taxi,” he said.
“They  have to remember that Fermanagh would be one of the last to put in meters in the whole of Europe. Northern Ireland is one of the last in Europe to implement this.
He points out that if taxi driving stays the same as it is there will be half the amount of taxis around in a few years time.
“There is nothing attracting new blood to taxis,” he said. “Drivers need to be coming into the industry at a younger age and we want to stick together and charge people a fair price.
The  Enniskillen tariff will be £3 with an addition of £1.60 after a mile and a half. So about 50 per cent of the town runs won’t be affected, he claims.