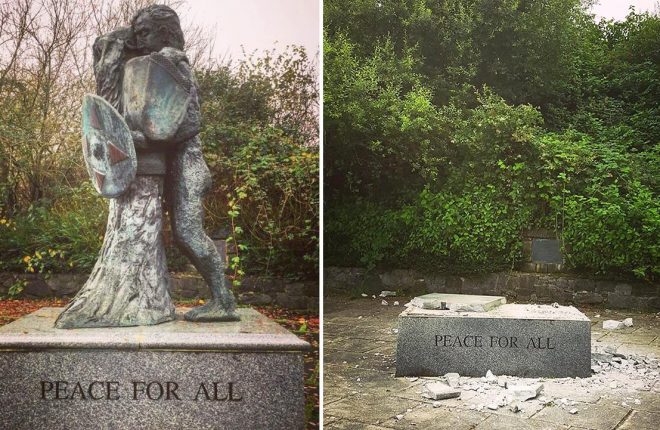 The famous bronze peace statue along the Fermanagh border with Cavan

A LIFESIZED statue, cast in bronze, symbolising the newly-created peace talks’ outcome in the north has been discovered, slightly damaged, after an aborted attempt to steal it from its plinth on the ‘peace bridge’ at Aghalane, linking Fermanagh and Cavan.
The statue, in green, on the Senator George Mitchell Peace Bridge on the road between Teemore and Belturbet, was a familiar sight to commuters heading to and coming from Dublin. It, and the plaque on the bridge parapet commemorating the official opening of the bridge by Senator Mitchell in 1999 were a popular stopping-off point for ‘selfies’.
The sculptor, Derek A Fitzimmons, from Newbridge, County Kildare, is at present living abroad and could not be contacted.
However, a spokesman for Kildare County Council confirmed his high regard in the profession and she added that one of his works can be seen outside the village.
A Garda spokesman said the statue went missing some time between 10pm on Saturday last, 6th August and 8.30 the following morning when it was discovered close by.
“It looks as if someone tried to steal it and suddenly realised this thing is heavy. There was a small bit of damage done to it which is currently being investigated. I can’t tell you the extent of the damage, but it obviously can’t be that bad.”
Anyone who can help the Gardai with their enquiries is asked to contact Ballyconnell Garda Station at 049 9525580.
Meanwhile, Gardai in Cavan Garda Station are investigating criminal damage to machinery at a quarry, belonging to the Quinn Group, in the townland of Tiercahn, Swanlinbar.
A Garda spokesman said the incident is believed to have taken place over the week-end, between 6th, 7th and 8th August.
The number to ring for anyone who can help is 049 4368800.