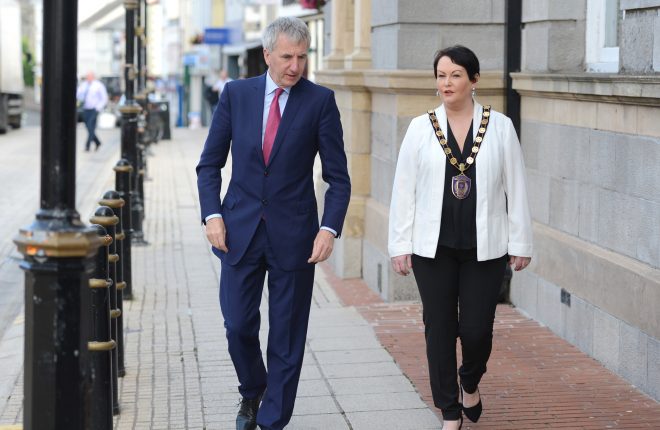 The Finance Minister has warned that any hardened border between the North and Republic in the aftermath of Brexit would be “a calamity for Fermanagh”.
Máirtín Ó Muilleoir was speaking to the Herald on a visit to Enniskillen on Monday for a number of engagements.
During his trip, the Minister met with representatives from Fermanagh and Omagh District Council and visited South West College and Waterways Ireland Headquarters.
In the wake of the June 23rd referendum result, concerns have been repeatedly raised about the impact this will have in border areas like Fermanagh, which voted to remain in the EU.
Fears continue over the impact on Single Farm Payments, infrastructural funding, the local economy and in particular the consequences of a possible hardened border.
Last month, council members called for a second EU referendum on Brexit during a special meeting to discuss the implications of the vote on the local area.
Mr Ó Muilleoir met a range of groups and individuals in Enniskillen and listened to their views. With the referendum vote continuing to cause uncertainty and concern locally, he says it’s crucial that the invisible border between North and South continues to allow the free movement of individuals and traders.
“The council, like all of us, are travelling in hope. Why would Fermanagh exit Europe when it has been part of it for so many years? It just doesn’t make sense. It would be a calamity for Fermanagh and the whole border region if we have to move back 50 years to a border situation where you must show your passport or goods vehicles have to be stopped. We’re about trying to create an island where there is shared prosperity. Part of that has to involve the free movement of people and goods so let’s not go back to the past because we have come such a long way.”
He added: “There are no economic benefits of Brexit and it’s my view that the EU Referendum mandate to stay should be respected. It’s not a done deal as we don’t know how many years it will take. It is certainly my intention in the time ahead as Minister to point out that there are no advantages to a Brexit.”
Along with his colleague in the South, the Minister for Public Expenditure and Reform, Pascal Donohue, Mr O Ó Muilleoir has written to the European Commission to express the concerns of both governments in relation to the threat to EU funding.
“We have also asked for a meeting in regard to protecting the £500million in Peace and INTERREG funds due between now and 2021 and which are of particular benefit to the border region.
“I have also taken steps to shorten the timescale for European funding applications in line with my belief that we should endeavour to maximise European funding in the time ahead. We must safeguard the EU funds that have been promised.”