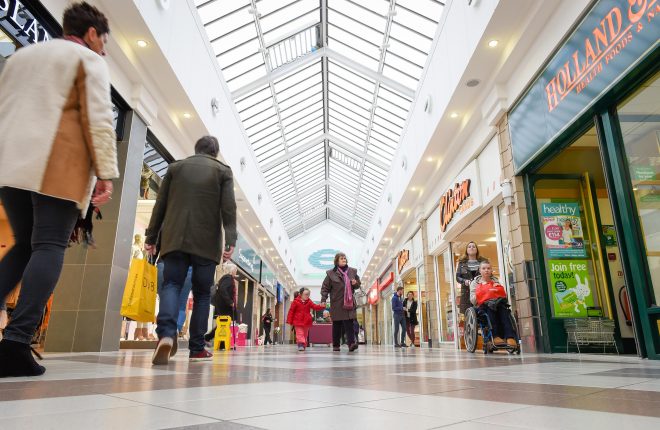 The aftermath of the Brexit has caused the sterling to plummet but the number of southern shoppers in Fermanagh to soar.
And that change in the past few weeks can be felt most strongly in the county’s main town Enniskillen.
Fermanagh has witnessed a big increase in the number of shoppers from border towns rushing to spend their euros while the sterling rate is low.
The euro is currently going further due to the weak exchange rate against the pound so shoppers are taking advantage and are coming across the border, to areas such as Enniskillen. The Erneside Shopping Centre is thriving due to the low exchange rate.
Jim Masterson, Erneside Shopping Centre General Manager, says the centre has definitely seen an increase in shoppers crossing the border.
“We have seen a steady increase from the start of the year and increasingly so since the Brexit vote. People from the south are visiting more and they are also spending a lot more when they are here and sales have gone up.”
The low exchange rate has not only benefited the local southerners with Euro to spend, but also people on holidays in the area are also shopping and spending more and in turn are boosting Fermanagh’s economy. A common theme arising from the low exchange rate is more people opting to stay overnight on mid week breaks rather than travelling to and from on the one day.
“Tourists are visiting more often and we would notice that people from across the border are staying here and taking a mid week break. The tourists who are in the area are spending more and there is an indication of this across the whole centre,” said Mr Masterson.
Although there is an increase in the expenditure of euro, sterling customers are also opting to spend their sterling in the North rather than going across the border where their money no longer goes as far.
The cross border shoppers are opting to use their card while shopping rather than visiting the bureau de change or a bank to exchange their money.
“We have noticed that those coming across the borders are using their bank cards so we cannot measure the amount of euros being spent but Euro cards are being used more often than they are going to the bank to change money,” added Mr Masterson.
With the summer almost over, and the winter approaching if the sterling rate maintains at it’s low level exchange rate, border counties such as Fermanagh could be in for a very profitable year.