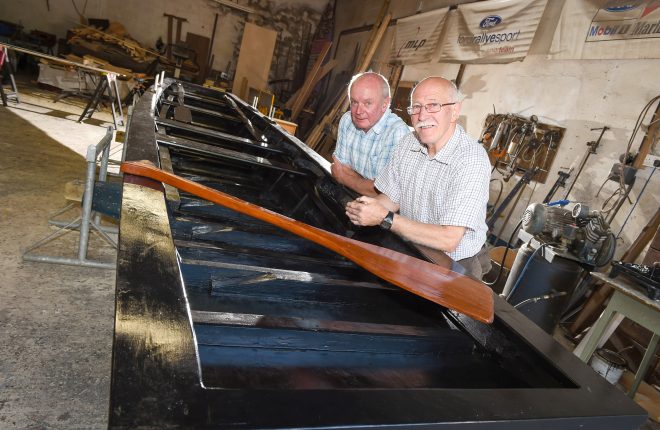 Fred Ternan and Bert Robinson with one of the two cots that was built in the mens shed in Newtownbutler Picture: Ronan McGrade

A FAMOUS boat race from the 19th century is due to be recreated at the Crom Estate this week as part of the first ever Lough Erne Heritage Regatta.
The event, which takes place this Saturday, August 20 from 11am, will see the official launch of two cots which have been painstakingly built in the traditional manner by Lough Erne Heritage. There will then be a short play telling the story of the famous Crom cot race, before holding their very own cot race themselves – the first in living memory on the Erne.
Fred Ternan from Lough Erne Heritage, who were formed just over a year ago and have been tirelessly working since to celebrate the history and culture of the Erne, recalled the story of Fr Clarke, the mixed marriage, and the cot race at Crom in 1856.
“The yacht races that used to take place among the houses on the upper lough were crewed by the men from around about, obviously men experienced on the water and all of that,” said Mr Ternan, who said descendants of the rowers from that day would be present on Saturday.
“When the regatta was over there was always cot races. The gentry, they would’ve collected money from amongst themselves as a prize for the winner of the cot race.
“That year, when the race was over and the men had won it, they went up to Lord Erne and said they didn’t want the money but instead they would like that he would arrange to get Fr Clarke back from America.
“Fr Clarke was in America because he had officiated in a mixed marriage, and it was illegal to do that. Therefore he was going to be arrested, but a friendly police man dressed as a tramp tipped him off and he escaped to America.
“Lord Erne didn’t know if he could or couldn’t but he negotiated and all charges were dropped and he served out his days and he’s buried in Newtownbutler.”
Stressing Lough Erne Heritage was about more than building boats, but rather used the boats to tell the history of the lough, Fred said interest in the event – which anyone can enter – was already high and if there were too many entrants on Saturday to take part in the race they would then hold a second one, followed by a third to determine the winner of what he said was “a fun regatta.”
He added while not the first major event held by the group, who hosted a successful art exhibition and boat display at Enniskillen Library last month which attracted hundreds of visitors over just two days, it may likely turn out to their biggest.
Among those attending on Saturday will be those who helped build the new cots to traditional designs, including a contingent of Cavan men who were heavily involved. One of the cots is even wheel-chair accessible.
To find out more, including how get an application form to take part in Saturday’s race, or if you are interested in joining Lough Erne Heritage, visit them on Facebook, call 68621666, or email info@lougherneheritage.com