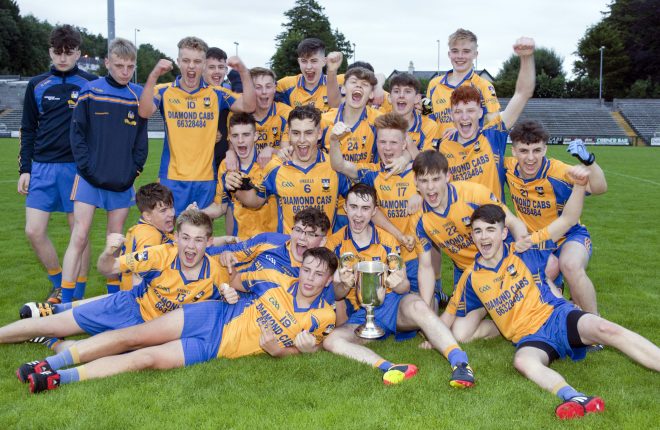 The Gaels side have now completed another minor double and manager John Reihill admits it’s a great feeling.

“We won well in the end and we stuck to the game plan well. Our two late first half goals I felt pretty much put the game out of reach and we dominated possession for most of the game, especially in the second half.”

The opening ten minutes of the game were close throughout, but Reihill says he was still confident his side would come through.

“We started slow but we still had goal chances. I knew we would make chances and we had plenty of players capable of taking some fine scores.

“We will take a break now with the minor squad and come back when the u16 seasons finishes around the end of September time. Enniskillen Gaels have started a gym so we may look into that, but for now the boys will enjoy the break, while others will go into u16 football.”

The Enniskillen Gaels side last season defeated St Enda’s Glengormley before bowing out of the competition against a strong St Eunan’s Letterkenny side. Reihill says you just never know what to expect at the prestigious St Paul’s Ulster Minor tournament.

“Last year we went into it unknown and to be honest it will probably be something similar. The physical sides in the Ulster club arena are a world away from Fermanagh club sides.”