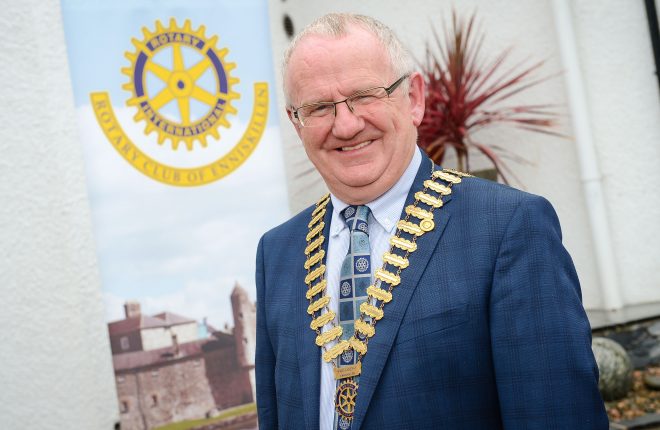 Kenny Fisher, President of the Rotary Club of Enniskillen for 2016/17 RMG81

BALLINAMALLARD man Kenny Fisher has taken up the Presidential chain of office at Enniskillen Rotary Club.
Mr Fisher took over the reins from outgoing President Ken Rainey at the Rotary Club’s AGM on Monday. It is the first time in the history of the Club that a member has taken on the role of President for a second time.
Kenny joined the Club in 2002 and has been actively involved in many activities, especially fundraising, since joining.
He has also held numerous positions during this time, culminating in the role of President in 2012/2013.
The theme for the incoming year is “Rotary Serving Humanity” and the new President told the Herald that “service to humanity has been the cornerstone of Rotary since its earliest days and has been its main purpose ever since.”
The local Rotary Club meets every Monday lunchtime in the Killyhevlin Hotel and is very much associated with fundraising.
In his year as President, Mr Fisher hopes to promote a number of local and international causes.
“The main fundraising project for the year is the purchase of a new minibus for Willowbridge School. This is a worthwhile project as at present the school does not have their own bus which can transport clients in wheelchairs.
“A full programme of activities are planned for the incoming year. Plans are being considered to bring the Club out into the community with visits to local businesses and organisations in various locations throughout the county.”
Mr Fisher also paid tribute to his predecessor, local accountant Ken Rainey.
“Ken has provided excellent leadership during the last year and I congratulate him on completing his main project at the Killadeas Sensory Garden.
“I am looking forward to the challenge and hope to maintain the high standards set over the years set by previous Presidents, and keep the name of Enniskillen Rotary Club out in the community”.
Mr Fisher was recently presented with a Paul Harris Fellowship, a most respected and prestigious honour for Rotarians, in recognition of his contribution to Rotary over the past number of years.
The new President spent 17 years in finance in the Erne Hospital and 17 years in Fermanagh College (later South West College) in Enniskillen before taking early retirement. In order to keep himself occupied, he works part-time at Beatty’s shop in Ballinamallard and at Marks and Spencer in Enniskillen but devotes much of his time to charitable causes.