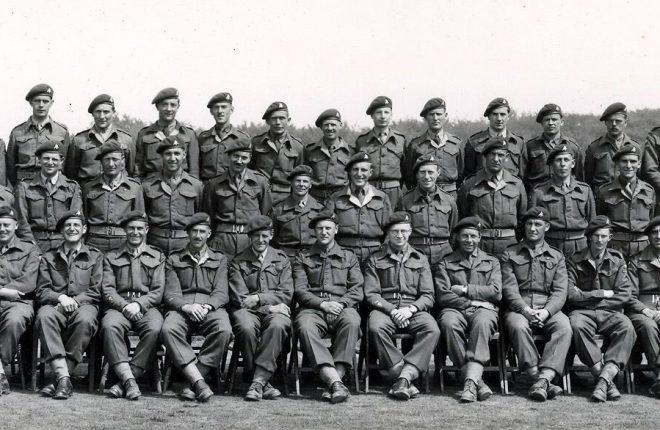 TODAY is the 72nd anniversary of D-Day, when hundreds of thousands of Allied troops stormed the beaches of Normandy. Among them was a Fermanagh minister.
While the troops of the US 8th Infantry Division, who had been based in Fermanagh during WWII, took part in the second wave of the landings in early July 1944, Rev James McMurray-Taylor was there from the very first day. Flying in on the evening of June 6, Rev McMurray-Taylor acted as padre to hundreds of soldiers, many of whom would lose their lives in the hours and days to come.
His story has remained largely unknown until recently, however, when Enniskillen-native Roger Edmondson happened to learn of the remarkable minister while getting his hair cut in Portadown.
“It came via a casual remark by my barber,” said Roger. “He said a member of his family, his sister-in-law’s father, had been a Church of Ireland minister who for many years was rector in Killadeas/Castle Archdale, and that during WWII he was a padre with the 1st Battalion Royal Ulster Rifles (RUR) on D-Day.”
After hearing this, Mr Edmondson, whose father was a member of the 8th Infantry Division and met his mother while based in Fermanagh, began researching Rev McMurray-Taylor.  Born in Ballymena in May 1916, Rev McMuarry-Taylor was educated at Trinity College, before joining the Church of Ireland as a minister in 1939, aged 23. When WWII broke out, he enlisted in the RUR and became padre.
“He was part of the RUR 1st Battalion, of the 6th Air Landing Brigade, 6th Airborne Division who took part in Operation Mallard, the British-borne landing that came in the late afternoon of June 6,” said Mr Edmondson, who added Rev McMurray-Taylor had begun that fateful day with a non-denominational service attended by every member of the battalion. Later in the afternoon, he flew out of England for Normandy on a glider accompanied by an officer, Sir Hugh Wheldon MC, who went on to become controller of the BBC.
Mr Edmondson noted many interesting extracts from his research on Rev McMurray-Taylor, such as occasions when he conducted burials services, for both Allied and German, while they were interrupted by mortar fire and fighting all around. At other times, working in the hot sun, the padre would brave the stench of death and get down on his hands and knees to remove identity discs and personal possessions of the dead, for return to their relatives.
After the war, Rev McMurray-Taylor was appointed to Derrybrusk, and in 1957 he was appointed to Castle Archdale and Killadeas parishes. He died in 2001 and is buried at the graveyard at Castle Archdale, and still has close family living in the area.