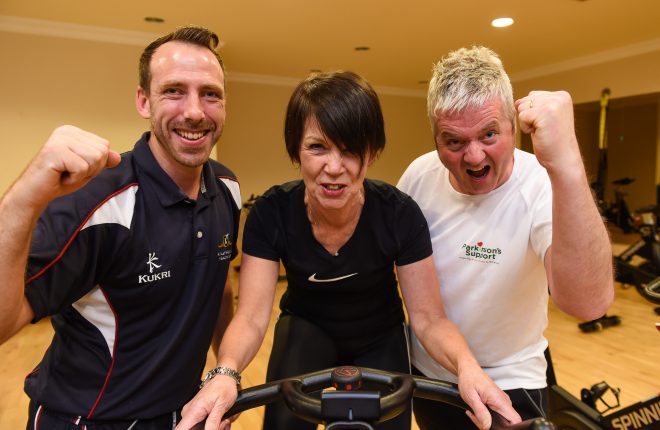 A GROUP of Fermanagh fitness fanatics are getting on their bikes to raise money for a local Parkinson’s charity.
Mark Corrigan and Nuala Lilley, whose both fathers suffers from Parkinson’s, came up with the idea to hold a charity “spinathon” after hearing recent medical research showed cycling can be hugely beneficial for Parkinson’s patients. The fundraising event, which takes place at the Killyhevlin Health Club on Sunday, June 12, will raise money for Parkinson’s Support Fermanagh, which is an independent charity that helps and supports Parkinson’s sufferers and their carers in the county.
Mark explained what event will entail: “The fundraising Spinathon on 12th June will involve eight hours of back to back spinning classes. Each session will be themed and different.
“Some of the sessions will appeal to those who want to challenge their spinning by competing on calorie burn with some well known local athletes in a time trail or mountain climb session. Other sessions will carry a particular musical theme so that all tastes are covered and there is something to appeal to everyone.”
The Killyhevlin has 16 spinning bikes and the sessions are being sold at £20 per bike. You do not have to be a member of the Killyhevlin Health Club to partake in the event and Mark and Nuala are hoping that all sessions sell out.
Full details of the sessions are available in The Killyhevlin Health Club, Nature’s Choice Health Shop and on Nature’s Choice and Parkinson’s Support Fermanagh Facebook pages.
Mark added: “Parkinson’s Support Fermanagh meets monthly and the meeting is a mix of informative and social. Usually a guest speaker is invited in to talk on a topic useful for the group during the first half of the meeting, while the second half is tea, biscuits and a chat.
“Movement and speech are very important to anyone suffering from Parkinson’s Disease and to this end Parkinson’s Support Fermanagh provides weekly exercise and mobility classes, weekly yoga and a fortnightly choir for its members. All these activities are well attended and members enjoy the camaraderie and craic of meeting up as well as obtaining benefits from the activities.”