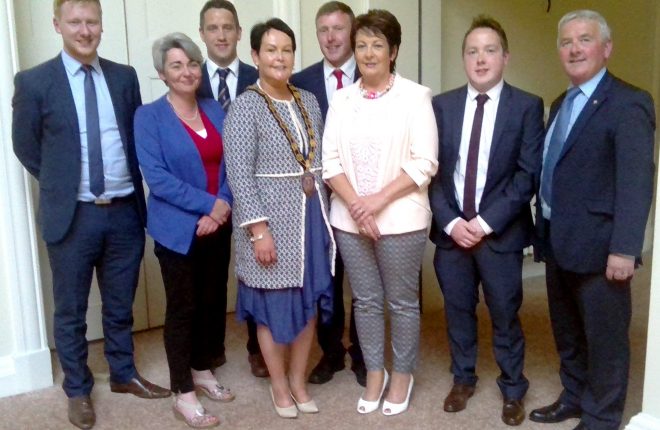 Councillor Garrity, the first female Chair of the new Council, succeeds Sinn Fein’s Thomas O’Reilly while the Ulster Unionist veteran Bert Wilson will take over as vice-chair from Paul Robinson of the DUP.

The positions were confirmed during the Council’s AGM in Enniskillen Townhall on Tuesday night.

Outgoing chair Tom O’Reilly and vice chair Paul Robinson were praised by counillors for acting in a fair, appropriate and impartiality durig their 14 months in the roles.

Mary Garrity was first elected onto the Fermanagh and Omagh Council in May 2014 to represent the West Tyrone DEA. From Trillick, the married mother-of-four worked for many years as a Post Office manager.

Speaking following her selection, Ms Garrity, said her priority for the year ahead would be ensuring that local communities get their fair share of investment.

“I am honoured and privileged to have been chosen by my party colleagues to serve as the Chair of Fermanagh and Omagh Council. It’s a position I don’t take lightly. I intend to be a champion for people and communities in the West that have, for far too long, suffered from neglect.

“I will visit and support communities across Fermanagh and Omagh to get their fair share of investment and jobs. We are a people and a community on the rise and we refuse to be held back or abandoned by anyone. The exodus of skilled young people from our communities cannot continue and I will do all in my power to bring together all those with an interest in promoting our area as an ideal place to live, work and do business.

“I also want to promote the limitless possibility of partnership politics. For too many, our politics has been degraded by petty squabbling and sham fights. When we work together, there is no limit to what we can deliver for our people and our communities. I hope to work with everyone across the political spectrum to deliver more form the people of Fermanagh, Omagh and West Tyrone in the year ahead.”

Two new councillors were also co-opted at the meeting to replace the SDLP’s Richie McPhillips and Rosemary Barton of the Ulster Unionists who were elected as MLAs in last month’s Assembly elections. They were replaced by Mr McPhillips’ son Garbhan for the SDLP and Diane Armstrong (UUP).

This week’s meeting also confirmed the appointment of councillors into positions of responsibility, as well as the election of councillors to committees and other bodies within the council district.

ELECTED WERE AS FOLLOWS: