Advertisement
HomeSportSoccerRelief at safety, but Anderson hits out at IFA
Advertisement 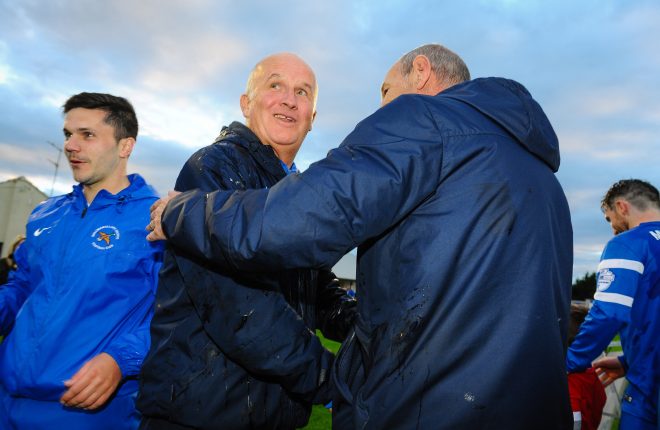 Whitey Anderson looks back on a successful season full of ups and downs.

With time all but up in Ferney Park, out-going boss, Whitey Anderson was contemplating a distinctly sombre tone to the conclusion of his tenure. And then things were turned on their head.

“I was up in the stand and it was going through my mind what I was going to say to the players, and congratulating Institute. I just thought the game was over and then the next thing we got a corner and a late goal which is something that has happened against us so many times this season.

“I’m just delighted for everybody at the club and particularly the players. We were down to the bare bones. We had five players not available, three suspended, one out of contract and Shane McCabe, our most experienced player, unavailable.

I have to credit Institute, they’ve a good young side and we probably got the bit of luck in the end. Their manager, Kevin Deery, has put together a good young squad. It’s just a sad way to end the season.

“I stood down over six weeks ago, but the way things have worked out I’m still involved. We’ve a scenario where we had two managers in place, but Gavin [Dykes] and myself have worked our way through it together very well I must say. But all the credit has to go to the players. The way they’ve been treated has been despicable.”

Anderson is clearly angry about the treatment of his players, and he lays the blame for that fairly and squarely at the door of Carrick and the IFA.

“This was a scenario brought about by the incompetence of Carrick Rangers as a football club. If they had their processes right this would never have happened in the first place. But it’s also down to the Irish Football Association’s inability to have a process in place to deal with these matters quicker. They can hide behind the fact the legal process held it up, but if their processes and decision-making had been as they should have been then this would have be sorted much quicker.

“It’s the players I feel for and I want to pay credit to them because they really have been put through a rollercoaster. So has everyone at the football club from the chairman down. It’s been a very difficult period for the chairman Jeff Aiken, the office bearers. They had to appoint a new manager and obviously players want to know what their future is. Unless your involved in it people don’t realise what goes into it.

“I really am very angry with the Irish Football Association and the people within. Will they change? There’s a lot of them out in France at the Euros, but do those people really care about my players or my football club?

“There’s a lot of people out there talking about it’s great to see football west of the Bann, but I think a lot of these people speak from the teeth out. At the end of the day in this life you have to stand up for yourself and fight for what you believe in.”