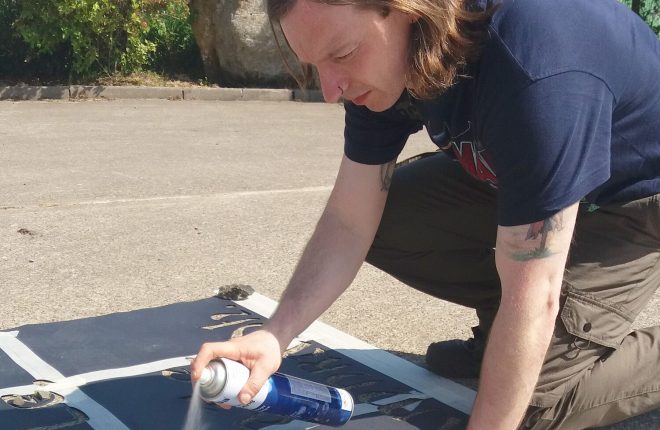 IF you’re out and about around the country lanes of Fermanagh in the coming weeks keep an eye out for a very special type of “hidden” art.
The latest offering from prolific Lisnaskea artist Kevin McHugh, the Sliabh Beagh Arts project entitled “Limerick Lanes”, in reference to the short poems not the county, involves spraying poetry and song lyrics on country roads. What makes the art so unusual is the fact it’s only revealed when it rains.
Ironically, while the group had intended that the art make best use of the typical Irish weather, the recent unusual spell of sunshine meant water had to be thrown on their first attempt to reveal the beautiful text.
“It’s a hydrophobic spray that repeals water, so it only appears when it rains or you spray water on it,” explained Kevin, who caused quite a stir late last year with his power-hose murals. “I’ve been involved with Sliabh Beagh for around five years now, and we’re always doing quirky wee projects like this. Everything we do is out of the ordinary.”
He added: “It’s all about having poetry in country lanes. The whole idea is to bring art out to places and people who wouldn’t normally be exposed to it, like with this and the power-hose murals, bringing it to country lanes and farmers’ walls. It’s so people who wouldn’t normally go to a gallery can get to enjoy it.”
Kevin said the brains behind both the hydrophobic art and the power-hose murals, and many other unusual Sliabh Beagh projects, had been group arts coordinator and “mad genius” Donna Bannon.
“This is what she has come up with this year, and it’s a brilliant idea,” he said. “I’ve done one so far, and it was for a group from Derrygannon Hall, outside Roslea. It’s the lyrics from an Irish song, about welcomes and the summer, as they had an Irish-speaking festival. It was one to test the waters, pardon the pun. It didn’t rain though, and I think they had to throw a buckets of water over it.
“There will be more popping up in the next few weeks, and they will literally be in random places around the Sliabh Beagh area, which actually takes in quite a big area from Fivemiletown to Roslea. We get a lot of rain here, so it’s good to actually make use of it.”
Aside from more examples of Limerick Lanes poetry, Kevin said he was planning more power-hose murals in the near future.