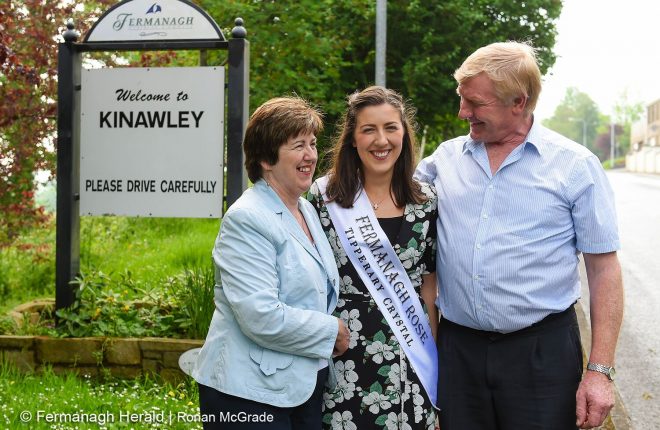 THE county’s entrant in this year’s Rose of Tralee festival has spoken of her pride in Fermanagh and how she wants to represent the county on the national and international stage.
Mairead McHugh was selected as the Fermanagh Rose at a selection event on Saturday night. Speaking to the Herald on Monday, the Kinawley woman said she was “still in shock” at being chosen to go forward to the finals in Kerry in August.
“I’m really excited and absolutely delighted. Hopefully I’ll be a good ambassador for Fermanagh in Tralee this year,” said the 25-year-old GAA fan. She added that she’d had “a fabulous day” on Saturday, meeting with the other potential Roses and visiting famous Fermanagh sites such as Belleek Pottery and Tickety Moo Farm before the selection event at the Enniskillen Hotel that evening.
“There were seven of us, and each of the girls was absolutely brilliant,” she said. “Anyone of them could represent Fermanagh very well. That’s what the Rose of Tralee is all about, it’s about celebrating young Irish women who are proud of Ireland, and about showcasing and promoting Irish culture nationally and internationally.”
Mairead said the selection process at the main festival would be slightly different this year, with all 65 Roses meeting with presenter Daithi O Se and an independent panel for a private interview beforehand. The final 32 will then be chosen for the main televised event. All the girls will still take part in the activities leading up to the event, though, such as the parade.
“Hopefully I will be able to make it to the final 32 and I will be able to promote the county,” said Mairead. “I am very proud to be from Fermanagh.”
A speech and language therapist working with adults, Mairead is a past pupil of St Naile’s PS, St Aidan’s  and later Mount Lourdes, and studied at Ulster University in Jordanstown before getting her first job in Scotland. After travelling for a few months before Christmas, she has now returned home after securing a job in Belfast.
“Being away really makes you appreciate your home and family,” she said, adding the Rose of Tralee Festival was “very family orientated” which she loved. Mairead said the festival also had a focus on charity, and said she had chosen the Stroke Association NI as her chosen charity as she worked closely with stroke patients as part of her job.
A country music fan and keen jiver, doing the bunny hop dance as her party piece on Saturday, Mairead is also a big GAA supporter and has wished the team well on Sunday.
“I hope to be here supporting them throughout the summer,” she said. “Hopefully it will be an exciting summer on both fronts, and we’ll get a few more days out in the months to come.”