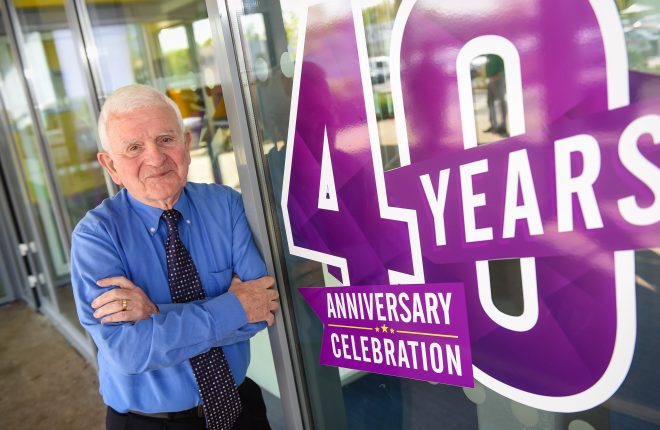 A self-confessed townie, brought up above Blake’s of the Hollow, Arthur Blake has seen plenty of changes in his time living in Enniskillen.
As a swimming addict, one of the pivotal events in life was the opening of the Fermanagh Lakeland Forum. It might have been a long time coming, but that only made it all the more valued. But that isn’t to say that the town was bereft of recreational resources before the Forum opened its doors.
“As a young lad we were told were going to have a new swimming pool and motorway to Dublin, but none of those things happened, so what we did as young people was play in the Broadmeadow where you had the police field, the soccer field – The Showgrounds and the old dump. The police played rugby, then you would have had horse jumping and soccer in the Showgrounds.
“You would see soccer players from different clubs during the summer time, people like Harry Gregg who was keeper for Man United. He was the first keeper I ever saw throwing the ball out, I didn’t even realise that was allowed. He was a magnificent keeper.”
His love affair with swimming started on sultry summers in Donegal and he passed it on to all his family.
“As a family we used to go to Bundoran and take a house for two months and I learned how to swim there. Then we used to dive in there for coins that people might throw in, that’s what you did when there was no TV or mobile phones.
“I remember bringing my two boys to Ballyshannon pool to learn how to swim before the Forum opened. I was 35 when the Forum finally did materialise so we were a while waiting for it. People were delighted to have it and have it so close to the town and it was great to be able to bring the boys there. They went on to swim for the Lakelanders club. I have two grand daughters who are swimming now in Dublin and are terrific swimmers. I get to see my nieces and nephews here at the pool so it’s a great social meeting place.”
Busy work and family life meant that Blake didn’t get to the pool as much as he might have liked, but he has come back to the sport with a passion and is an ardent advocate for its benefits.
“I’m back swimming about 28 years now in the Forum and I would swim 40 to 70 lengths or longer if I wanted. Generally that would be about 50 minutes in the water. It should never be stopped at schools, I think it’s a very important part of a child’s education. They do great lessons here and also do lifeguard courses and I think it’s important. It’s important to have something like that because you can swim no matter where you are all your life.”
Now Blake is enjoying his swimming as much as ever and with a variety excellent rates and packages available he can have a dip any time he likes.
“As a senior citizen I get access at a very good rate. I get the monthly rate which is something like £17, which is fantastic, it’s terrific value. I love it because it’s a great exercise and I recommend it to people.”