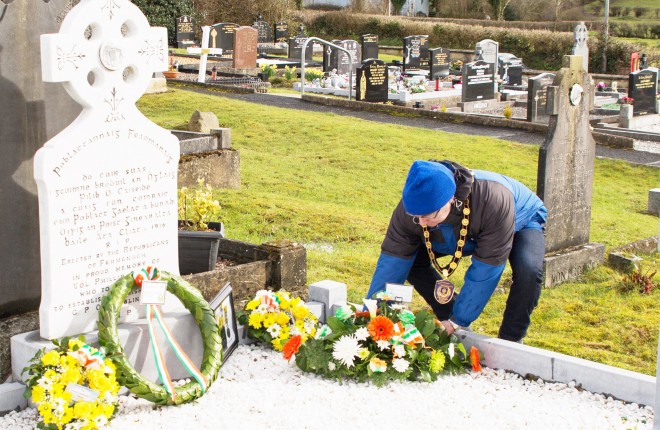 THE Chairman of Fermanagh and Omagh District Council has been accused of “damaging community relations” by wearing his chain of office to an Easter Rising event last month.
Sinn Fein councillor Thomas O’Reilly has been under fire for wearing the chain to the 1916 commemoration in Arney on Easter Sunday, an event organised by his own party.
The issue was raised by DUP councillor Keith Elliot at the close of the monthly council meeting.
He said: “I believe that it wasn’t a wise thing to do as it brought the office into controversy. In my opinion, the mature approach would have been not to wear it,” Mr Elliott said.
“Obviously when the chair wears his or her chain of office they are representing everyone in the council. However by wearing it at the ceremony in Arney, he was not respresenting the unionist community,” he added.
In repsonse to a question from the UUP’s Rosemary Barton, Cllr O’Reilly defended his decision saying that he had attended the commemoration in his role as Council chairman.
“I think it’s very important that the office of council chair and vice-chair gets out and represents as many people as possible. Not all of the functions that we attend will be something that everybody buys into. As it’s the centenary year of 1916, the chair should use the opportunity over Easter to go out and represent the section of people that believes 1916 is very much a significant part of their history and wish to commemorare it.”
Cllr O’Reilly also pointed out that The Queen laid a wreath in honour the 1916 Easter Rising leaders during her visit to Dublin five years ago.
Cllr Barton said that any ceremonial duties carried out by the chairman “should
be above party politics” and represent “all citizens of the council area”.
“The people I represent do not believe that the role of the chair is to wear a ceremonial chain that is paid for by all the citizens of the council to events that are perhaps not inclusive of everybody. The unionist community and indeed moderate nationalists do not believe that the 1916 Rising had any justification whatsoever,” she said.
Independent Raymond Farrell said the actions of the chairman had “damaged community relations”.
Sinn Fein’s Brian McCaffrey added: “We had an opportunity to do something that was acceptable to all traditions. Now because one of these has been challenged the logical extension of that is that if it’s not accpetable to commemorate the Easter Rising, then it’s not acceptable to commemorate Remembrance Sunday. I don’t particularly want to go down that path and I think we have to recognise that we come from different backgrounds.”
Advertisement