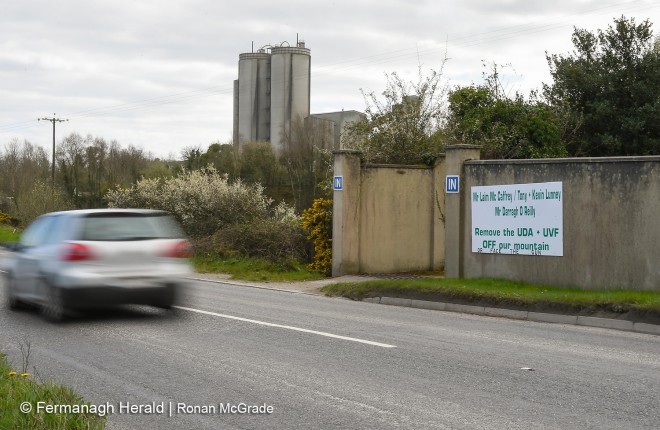 The sinister sign located near the Quinn Cement factory RMG05

THREATENING signs warning four senior executives at Quinn Industrial Holdings Limited that they “face the gun” have been branded as “self-serving bullying” by the company.
The signage appeared at roadsides along the Fermanagh/ Cavan border yesterday (Tuesday) telling them to “remove the UDA and UVF off our mountain or face the gun”.
It’s the second death threat to be aimed at QIHL chief Liam McCaffrey within the past month. He has already been advised by authorities to review his personal safety. Mr McCaffrey is named on the signs in Ballyconnell and Derrylin alongside other former Quinn Group executives Kevin Lunney, Tony Lunney and Dara O’Reilly.
Last month, a threatening letter was sent to workers at Danish owned energy company Vestas to “stay away” from an 18-turbine windfarm at Slieve Rushen in Derrylin, a former Quinn Group property, or “face the bullet”. The letter ended with the words “final warning” and was accompanied by three bullets.
In a statement to the Fermanagh Herald yesterday, a spokesman for Quinn Industrial Holdings Limited said: “This criminal activity is designed to intimidate an entire community and local workforce and undermine businesses that continue to invest in sustaining and growing employment.”
It went on: “Neither QIHL nor the local community will be intimidated by this self-serving bullying and criminal activity.”
Amid the claims of intimidation and threats to employees, Unite the Union has reaffirmed its offer to mediate in the ongoing dispute.
Padraig Murphy, the Lisnaskea-based area branch chairman of Unite, said the threatening notices were “an unwelcome development” and only serve to increase “tensions and concerns locally”.
He said: “These latest signs and notices should be a red flag to everyone in our community. No one should have to live under the fear of death threats. It is a fundamental human right to live free of intimidation. These activities have to stop.”
Mr Murphy also revealed that a meeting took place last week between a representative of Unite and senior representatives of the current management in Quinn Building Products.
“We discussed action to remove these unwelcoming signs, and we hope to bring forward that engagement to secure the jobs of all. Intimidation and off-putting signs do nothing for our county, they only cast a shadow over jobs and investment,” he added.
Reacting to the news, PSNI Detective Inspector Brian Foster said: “Police are investigating this deplorable act of intimation against members of the local business community, and would appeal to anyone who observed this sign being erected. We would also like to hear from anyone who noticed any suspicious vehicles or activity in the area.
He added: “We continue to work with An Garda Siochana and will investigate any incidents of criminality. We understand the concerns of the local community and are working with stakeholders to address these.”