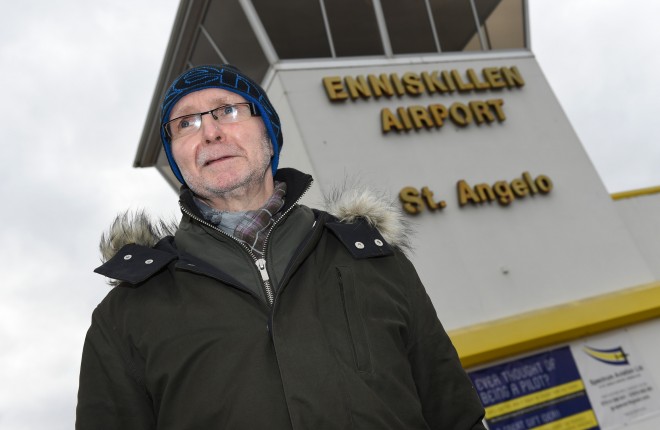 A FERMANAGH Parkinson’s suffer is to take a giant leap of faith today jumping out of a plane for a good cause.
Hugh Boyd from Enniskillen is taking part in a sky-dive on Sunday in Garvagh to raise funds for the Parkinson’s Support NI Fermanagh.
“Fingers crossed and weather permitting,” said the 65-year-old, who said he had “never done anything like it before.”
Hugh, who was quite relaxed about his plan to jump from a plane, said he had come up with the idea after talking to an Omagh man who had also decided to do the sky-dive. Hugh, a father of two grown-up sons, is the only one doing it to raise money locally, however.
“We had to raise over £300 for the jump itself, and that’s been seen so everything else is a bonus,” said Hugh, who has sponsorship cards available for those who want to donate. All money raised will go towards the Fermanagh branch of Parkinson’s Support NI.
Hugh, who has been living with Parkinson’s for around ten years, having first noticed something was wrong when he began having trouble tying his shoe laces. Other symptoms included tiredness and a weak left hand.
“I’m bad enough, but there are people who are a lot worse than me,” said Hugh, who was full of praise for group secretary Myrtle Hemphill.
Hugh’s wife Maura said the group has provided a lot of support for their family. With around 150 members, they meet every third Wednesday of the month and hold various events and activities throughout the year, such as having a dinner at Christmas and organising trips away for patients and their carers.
Anyone who wishes to make a donation to the Parkinson’s Support Group Fermanagh can contact the group on Facebook or call 02868622009.
Advertisement