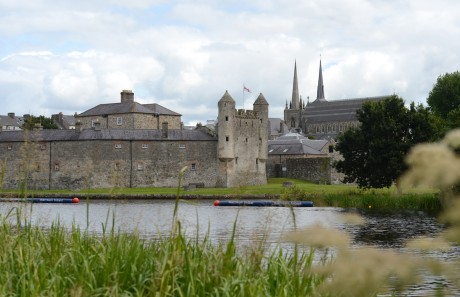 ENNISKILLEN Castle will be illuminated twice this week – once in green to celebrate our patron saint and a day later in red to mark Sport Relief.
Fermanagh and Omagh District Council have confirmed that they will be lighting up the castle tomorrow (Thursday) for St. Patrick’s Day and again 24 hours later for Sport Relief.
The iconic building will be lit up on March 17th as part of Project St Patrick’s celebrations of Ireland’s patron saint in Fermanagh. It will be just one of a number of buildings and landmarks that will be bathed in green to mark St Patrick’s Day from the Empire State Building in New York to the Leaning Tower of Pisa in Italy.
It will be illuminated again on Friday, this time in red in recognition of Sport Relief, the UK-wide event which brings together sport and entertainment to raise money to help vulnerable people in the UK and some of the world’s poorest countries. BT is supporting Sport Relief fundraising efforts. Staff will be volunteering at its Enniskillen call centre on Friday to accept donations from members of the public. They made the request to the council to light Enniskillen Castle red in line with other notable buildings such as Big Ben and the Tower of London.
This is the first time the castle will be illuminated for Sport Relief. It has been lit previously for St Patrick’s Day, but not every year. Last November it was illuminated on consecutive days to raise awareness of pancreatic cancer and diabetes.
Fermanagh and Omagh District Council say the decision is an example of how the Council can boost charities by marking specific days of significance several times a year.
“The lighting up of Council buildings to mark specific days of significance is just one of the ways in which the Council may provide support to a particular charity. Charities can apply to have Council buildings illuminated to mark specific days of significance to their charity which are associated with a particular colour or colours,” a spokesman told the Herald.