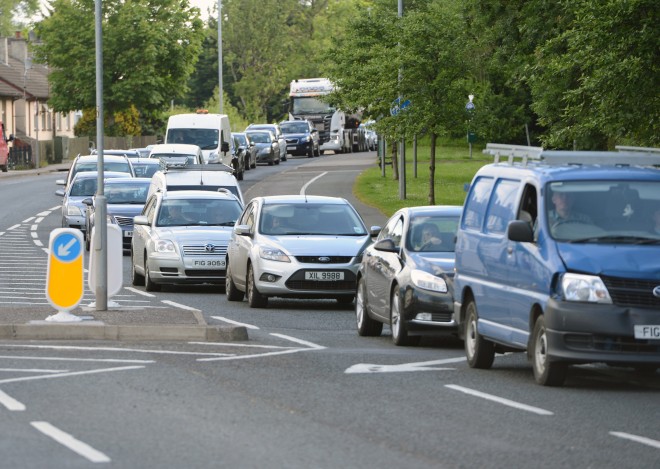 FEARS are growing the traffic chaos of last summer will return to Enniskillen this year, this time to the very heart of the town’s business centre.

Gaol Square is the busiest junctions in all of Fermanagh, with an estimated 18,000 vehicles travelling between the square and the Wickham Link Road each day. There are plans to upgrade the junction later this year, to improve traffic progression and road safety, and it is estimated the works will take around four months to complete.

Following the mayhem seen by the upgrade works to Johnston Bridge last year, which caused lengthy tail backs and damaged trade at local businesses, there are fears the disruption could be even more detrimental at Gaol Square. On top of that, the works at Johnston Bridge are also likely to recommence within months.

Transport NI did not give a start date for the beginning of the Gaol Square project, but told the Fermanagh Herald:  “Plans for a proposed road widening scheme in Enniskillen at the A4 Dublin Road, between Tempo Link road and the Wickham Link Road were subject to public consultation on lands acquisition in December and TransportNI is currently considering the responses.

“The proposals represent an estimated investment of around £600,000 and involve widening of the existing carriageway to provide 4 traffic lanes, footpaths and parking areas. Construction would be likely to take around 16 weeks to complete.”

Due to the location of Gaol Square in the centre of Enniskillen, there are fears such a lengthy closure of the extremely busy road could have a devastating affect on business in the area. Declan Devlin, who runs Pizza Hut and the O2 shop which are both located on Belmore Street, which is connected to the junction, said the works could be “disastrous.”

“I’m very apprehensive about this,” he said. “It’s probably going to cause chaos, as they tend to block and close roads and then they don’t work on them on Saturdays or Sundays.

“We’ll be going back to the same problems we had with the bridge, but this time it’s in the centre of the town. It probably is necessary but I don’t know if it outweighs putting people out of business in the area for 16 weeks, and that’s if it only takes 16 weeks. This will be disastrous for businesses. I can’t understand why it can’t be done at night.”

Mr Devlin also questioned how and where the road could be widened: “I can’t honestly see where they’re going to do it. What are they going to do, knock down Dunnes Stores? It doesn’t seem to make sense.”

He added that the continued upgrade of roads within Enniskillen appeared to suggest there were no plans to built a town by-pass.
“It seems like they are doing these works instead of building a by-passes,” said Mr Devlin. “It seems like they’re trying to push more traffic through the town. I would wonder if they’re knocking the by-pass on the head with this.”

Can’t wait… Foodie lovers in for a town centre treat

Get Active with the Herald Continues

Clocking up the miles for Macmillan Cancer support

Connor and Emily doing their bit for charity