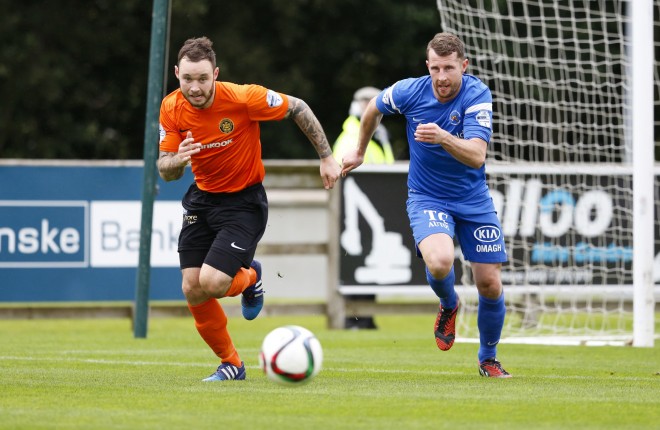 Leon Carters races towards the ball with Carrick player Andrew Doyle in pursuit.

It has been one of the oddities of this season that Ballinamallard’s record on the road has been significantly better than at Ferney Park.

With that in mind the decision to reverse the fixture against Carrick might be seen as a bit of a mixed blessing, particularly when Rangers handed the Mallards a stinging defeat there back in September.

The fixture reversal has come about following doubts about the availability of the Belfast Loughshore Hotel Arena. Adverse weather has already forced the postponement of two Danske Bank Premiership games already this season and with the danger of an unsustainable backlog building a venue switch was proposed.

“There was the option of saying no and taking the chance that the game would be on but the way the weather is it probably would be off again,” said Ballinamallard boss Whitey Anderson. “Being honest about it, it’s not ideal. I think it’s a poor situation that Carrick find themselves in, but from our point of view if we didn’t take the reverse fixture we’d probably find ourselves having to travel to Carrick on a Tuesday night and that is a serious long journey for us so we decided the sensible thing was to play the game on Saturday.”

On the plus side of the ledger, momentum is with the hosts for this one. While Carrick were kicking their heels last week, the Mallards were battling their way to a hard-fought point in Windsor Park. Nevertheless Ballinamallard are forewarned and forearmed about Carrick, and especially their goal hungry attacker Miguel Chines.

“He scores a lot of goals and he works extremely hard,” said Anderson. “He’s very hungry and Carrick are a hard working side. They’re very committed, and in Chines they’ve got a goal-scorer. They beat us 3-0 at home the last time and they deserved to beat us, they were the better side and we were very poor that day from our point of view. They punished us for our ineptitude and I’ll certainly be expecting better this week from our players.”

Shane McCabe’s red card sees him miss Rangers visit, but Ballinamallard will be bolster by the return of Adam Lecky. Meanwhile keeper Stefan McCusker, out after playing through the pain barrier in the absence of Alvin Rouse, will need at least another week before he returns to full fitness from thing injury.