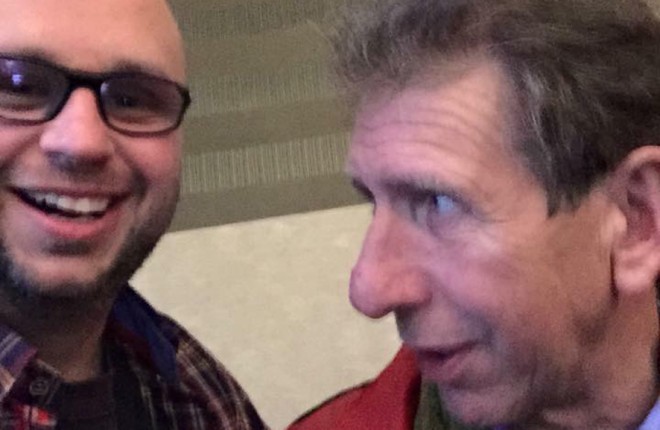 Neil Reid from Enniskillen, left, with the late Fred Carroll

THE ENNISKILLEN community has been shocked and saddened by the death of local man Fred Caroll on December 23 at his home.

An archaeologist and former teacher at Enniskillen Collegiate Grammar School amongst other schools, Fred was a well-known character around the town. It is thought he was 70 years-old.

Friend Neil Reid from Enniskillen, who knew Fred for over 20 years described him as the “Indiana Jones of Enniskillen”. Mr Reid highlighted his friend’s passion for archaeology and suggested that items recovered from his “hundreds and hundreds” of digs should find a place in Enniskillen Museum.

“He was an eccentric individual you would see him out in the summer in his shorts on his bike, he enjoyed a wee Powers, but I’ve known Fred over 20 years and I’ve never heard a bad word about him. When news came through the other night that he passed everyone in the town that knew him was shocked, past pupils came up to me.”

He continued: “He loved jokes. I remember any time I met him on the street Fred’s voice was all too recognisable and he’d tell me a joke and I’d tell him a joke . He was always up for a bit of fun, there was no badness in him at all, I don’t remember ever hearing a bad word about him.”

Mr Reid described Fred as a “character” and said the town will not be the same without him.
“He was the Indiana Jones of Enniskillen. He was a real character and there’s too few characters left in Enniskillen and there’s now one less with Fred’s departure.”

Fred was a father to Colin and grandfather to Aimee and Matilda. He leaves behind his brother Robert and the late George. His funeral will take place today (Thursday) at Roselawn Crematorium in Belfast at 1.30pm.