Advertisement
HomeSportSoccerPrecious points at stake for Mallards on Saturday
Advertisement 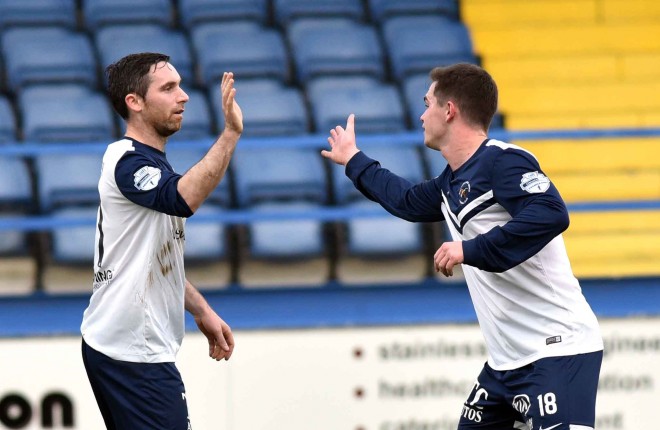 Ballinamallard’s Jason McCartney celebrates after scoring to make it 1-1 during last Saturday’s match at Mourneview Park.

Games between Ballinamallard and Ballymena have tended to be tight affairs. And already at this stage of the season, this one has the air of a six pointer about it.

The winner will be casting their eyes up the table, the loser starting to take a look or two over their shoulder.

“Ballymena and ourselves are level on points at the present time so both teams will be trying push up into the top half of the table so it’s an important game for us,” said Ballinamallard boss Whitey Anderson.

“It has the potential to be a tight game with little in it. But on the other hand it could be a day where both managers are tearing their hair out over the defensive display. But there’ll not be much between the teams, I’m definitely convinced about that.

“After losing last week I know the players are hungry to respond again and that’s what I’ll be looking for from the players. I don’t think they’ll need much motivation.

“We want to push as high as we can. At the minute we’re still in reasonable touching distance of the top six, but we need to start picking up points again and not lose any more ground.”

Ballinamallard’s super run in October coincided with the return of Johnny Lafferty. Anderson knows Lafferty has played a big part in driving the Mallards forward, but says playing structures have been the key to the side’s success.

“I always knew Johnny was a big player for me,” said Anderson. “Since he’s come back into the team he’s made a big impact. But the shape of the team and the way we’ve been trying to play has always been there and Johnny has just added something to that. It’s a collective thing, everybody in the group has played well.

“Johnny has brought a lot to the table, but I’m sure he’d be the first to recognise that there’s others around him who have contributed as well. He’s certainly been a good influence for us, there’s not doubt about that.”

Meanwhile, up front Liam Martin is another who has justified Anderson’s faith in him, although he’ll be sitting out the visit of the Braidmen through suspension.

“Liam Martin’s played well, Ryan Campbell and Mickey McCrudden played well, Stevie Feeney’s been a good captain up front,” said Anderson. “Liam chipped in with three goals in October and he works very hard. He’s extremely hard on himself, and has put a lot into his game. He trains the way he plays. I’m sure he’s hungry for more goals. He’s out for this week’s game on a one game suspension, but he has a bit of a knee problem so the rest has probably come at the right time.”

Martin aside, Anderson expects to have a full deck to chose from on Saturday. He’s pleased to see the competition for places really starting to hot up as the Mallards climb the table.

“Shane McCabe might be fit to take a place on the bench this week. James McKenna is back in the reckoning, so is Cathal Beacom, so we’ve basically got a full squad at the minute bar Liam who’s suspended on Saturday.

“We’ve certainly a lot of competition for places and you can see the competition in training, the intensity is very high. That can only be good for me, good for the players and good for the team. People are putting themselves about. They know that if they get in and play well they’ll hold their place, simple as that.”