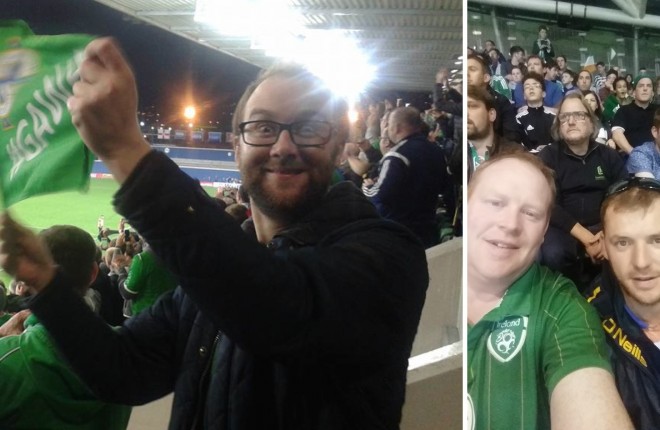 Delighted fans of both Northern Ireland and the Republic of Ireland

Fermanagh folk were smiling last night as both Northern Ireland and the Republic of Ireland  won their European Championship qualifiers.

In defeating Greece 3-1 Northern Ireland booked their place in France, inspired not only by a Fermanagh contingent on the pitch, but off it. In addition to Enniskillen man Michael McGovern playing in goal last night, Kesh star Kyle Lafferty has helped fire them to France with his goals, while Roy Carroll has also played an integral part in the campaign.

At Windsor Park there was a strong Fermanagh representation willing their boys on to victory including Enniskillen man Gary Donalson, pictured below.

The Republic of Ireland booked their spot in the European Championship playoffs after a remarkable 1-0 victory over world champions Germany at the Aviva Stadium, Dublin. A win or a draw higher than 1-1 against Poland on Sunday  will guarantee their spot in France. Derrylin men Brian and Kieran Maguire were some of the many Fermanagh people at the game, in what was one of their greatest results in recent memory.

Were you at either game? Send us your pictures via Facebook to Fermanagh Herald or via email to g.mckeown@fermanaghherald.com