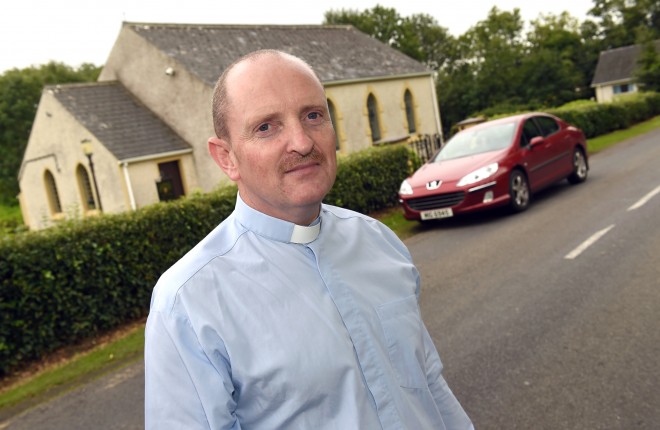 HEARTLESS thieves have targeted yet more church goers during morning service, this time in Maguiresbridge.

Less than two months after churches in Teemore, Castle Archdale and Killesher were all hit in the same day, Maguiresbridge Presbyterian Church, on the Tempo road out of the village was targeted by thieves.

During morning service on Sunday September 6, which starts at 12.30pm, three parked vehicles were broken into by passing thieves. The front passenger windows of a Renault Clio and a Toyota Rav 4 jeep were broken along with the driver’s window of an Vauxhall Insignia. All three windows were next to a hedgerow in front on the church. Various items were taken including cash, credit cards and gift vouchers.

Reverend Rodney Beacom from Maguiresbridge Presbyterian Church, a rural church with 25 families, explained that no-one knew of the thefts until after the service.

In the short term Reverend Beacom explained that someone will be checking on cars during the service and during Sunday’s service the congregation prayed for those responsible.

“We prayed for grace to forgive these people for what has happened. Also we prayed for the people who did this. We prayed that they would be convicted and challenged by what they have done and the holy spirit would lead them to a place of repentance, where they would realise the need for them to be transformed and changed and they would know the love, mercy and grace of Christ. That’s the approach we’re taking on it. We can’t change what happened , we can only look forward and try to work for a better future and that’d what we’re aiming to do.”

PSNI inspector Roy Robinson said the incident carried the hallmark of previous thefts outside places of worship and said the same gang may be responsible.

“It is likely, these are very similar and it could be easily connected to those involved in this activity. They broke the windows next to the hedgerow so somebody passing wouldn’t have seen it. It is certainly an opportunistic crime. It’s despicable that people would do this when people are at a place of worship, they can’t go along to a place of worship without somebody coming along and smashing their window and taking the contents of their vehicle. My appeal would be they don’t give these heartless criminals the opportunity to take their hard earned cash and goods from their car and the ladies, if they have a handbag take all with them in it.”

Mr Robinson confirmed that no arrests have been made in connection with the Maguiresbridge church thefts and the previous thefts in Teemore, Castle Archdale and Killesher. Anyone who noticed anything suspicious in and around the area of Maguiresbridge Presbyterian Church prior to 1.40pm on Sunday, September 6 is asked to contact police.