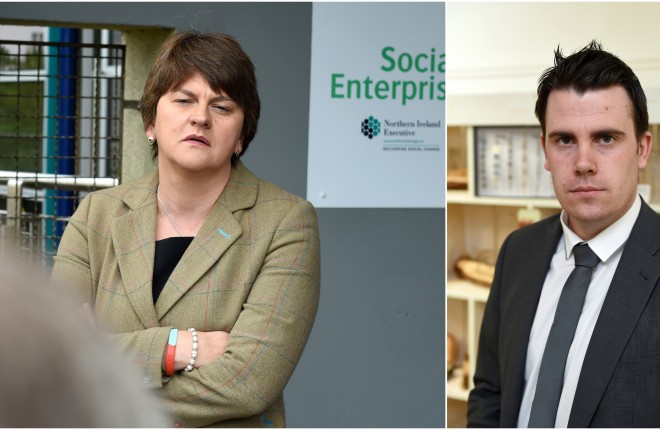 FERMANAGH’S MLAs have racked up almost half-a-million pounds in expenses in just one year.
In an era of harsh austerity and endless cuts to public services and community groups, the six MLAs of the Fermanagh and South Tyrone Assembly constituency claimed a total of £487,354.89 in expenses from April 2014 until March 2015. That’s on top of their salaries of £48,000, which were increased by 11 per-cent over the past couple of years.
Local Sinn Fein MLA, Phil Flanagan, claimed almost £100,000 in expenses alone. Close to £70,000 of that amount was spent on office supplies and support staff.
Mr Flanagan claimed a total of £97,264.60. Over £10,000 of this went on travel expenses to Stormont, and a total of £68,859,25 to office cost expenditure. Of that figure, £63,065.60 was spent on office staff salaries. Phone bills, new blinds, iPhone repairs, computer virus removal, printer toner, and copying machines were also among the list of claims by the Sinn Fein MLA, who spent £500 on skip services in the past year.
The Fermanagh and South Tyrone who claimed the least in expenses for the past year was Maurice Morrow.  The Dungannon DUP representative claimed a total of £69,118.48. Just under £60,000 of that figure was spent on office expenditure, with £41,658 allocated for support staff.
Mr Morrow claimed £4,200 on travel expenses, and listed among his office claims were £500 on tax returns with D Jackson & Co, and a total of £1679 on a Members Private Bill on human trafficking and exploitation. The second lowest was now-MP Tom Elliott, who claimed £75,850.77. Aside from £44,000 spent on office staff salaries, Mr Elliott’s largest expense £1,500 for research in September last year. He also claimed for office rent, utilities and insurance. Mr Elliott’s replacement Neil Sommerville was not included in the expenses list as he only became an MLA in June this year.
Next up was acting First Minister Arlene Foster, who claimed a total of £78,252.21. Ms Foster spent £47,688 from 2014-2015, and £12,000 in rent for her office space on New Street in Enniskillen.Ms Foster’s next largest claim was for the installation of a security office at £1,980, and £1,066 on travel expenses to Stormont Finally, Sinn Fein MLAs Sean Lynch and Bronwyn McGahan each claimed in the region of £83,000.Ms McGahan came in just below her party colleague, claiming £83,084 compared to Mr Lynch who claimed £83,784.83. Once again, the largest expense claimed by the each of the two MLAs was for support staff salaries.
Ms McGahan, who has an office in Dungannon, claimed £61,555 to pay for staff. She also claimed £8,325 for travel expenses, as well as £1,270 for four copying machines, and £290 to hire a room at Stormont for a meeting on farming issues.
Mr Lynch claimed £50,701 to pay for his support staff, and over £10,000 for rent on his office at Main Street, Lisnaskea. Other claims by the Fermanagh MLA include £274 on postage and £745 on stationery.
All MLAs are entitled to claim a maximum of £69,238 on office cost expenditure, but this is set to be cut by £1,000 in order to allow the Assembly to meet it’s budget reduction targets for 2015/16.