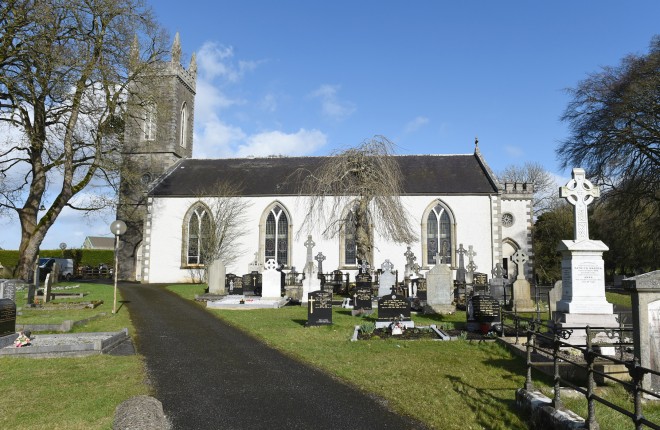 A BRIDE’S big day has been shattered by heartless thieves after they targeted wedding guests’ cars parked outside a church in Roslea.

The cruel thieves pocketed presents, money and medication as over 150 guests watched the bride and groom exchange their wedding vows.
Horrified guests returned to the car park at St Tierney’s Church to find the windows of three cars had been smashed and a number of items taken from inside, including an envelope containing €700.

The bride, who is from Roslea and the Derrylin groom married on September 5.

One guest said: “It was very upsetting, there’s no point in saying otherwise. One of the people that had their car broken into said he wasn’t coming but they were persuaded to come on ahead.”

Fermanagh PSNI officer, Colin Foley, appealed for more information following the thefts: “Three vehicles, parked on Church Street, Roslea, were broken into on September 5. It is understood the owners were attending a wedding at the time.

“The incident took place between 1pm and 2.23pm. Windows were broken on all three vehicles and a number of items stolen, including a handbag containing an envelope with approximately 700 euro, an Iphone 6, jewellery and medication.”

Some 170 guests at the wedding were left shocked and bewildered at the break-ins.

Some became aware on leaving St Tierney’s Church of what had occurred while most of the guests knew on arrival at the reception in the Raddison Blu Farnham Hotel in Cavan.

One guest, who asked not to be named, said she and her husband noticed the girl who had been robbed of €700 in an agitated state earlier.

“We thought nothing of it. The girl was trying to get a reception for her mobile phone but we never passed any remarks.

“It was only when we got to the reception we were told about it. Everyone was talking about it. It was very upsetting, there’s no point in saying otherwise. One of the people that had their car broken into said he wasn’t coming but they were persuaded to come on ahead.”
It was their first experience of a break-in. It was put to the guest that, over in Derrylin, church leaders were about to form ‘car watch’ groups.

“I think it’s terrible that you’ve to put someone on guard outside a chapel but, I can see their point. It needs to be done everywhere.”
As for the wedding reception, things gradually improved.

“As the time went on, there was no more talk about it, for the bride and groom’s sake. It was their day. Everyone’s attitude was: ‘We will deal with it tomorrow’.”

Meanwhile a local reverend has taken action and set up a car-park patrol to tackle spiralling church crime.

It comes after church goers were targeted during morning service, this time in Maguiresbridge, less than two months after churches in Teemore, Castle Archdale and Killesher were all hit in the same day, Maguiresbridge Presbyterian Church, on the Tempo road out of the village was also targeted by thieves.

In the short term Reverend Rodney Beacom explained that someone will be checking on cars during the service and during Sunday’s service the congregation prayed for those responsible.

“We prayed for grace to forgive these people for what has happened. Also we prayed for the people who did this. We prayed that they would be convicted and challenged by what they have done and the holy spirit would lead them to a place of repentance, where they would realise the need for them to be transformed and changed and they would know the love, mercy and grace of Christ. That’s the approach we’re taking on it. We can’t change what happened , we can only look forward and try to work for a better future and that’d what we’re aiming to do.”