IN JUST NINE MONTHS after the original Quinn Group management team moved back in to the company’s old headquarters at Gortmullan, Derrylin,  a total of 74 new jobs have been created with more investment expected in the coming months.
The jobs have been created across the company at a range of levels since Quinn Industrial Holdings Limited (QIHL) acquired the Construction Industry Supply (CIS) and Packaging businesses of the former Quinn Group in December 2014.
Managing director Liam McCaffrey said he was delighted to confirm the good news and added that he expects the company to be in  a position to create more jobs in the coming months.
“It’s been a positive time overall since we acquired control of QIHL back in December of last year, and a major effort has been made to refocus the business towards a rapid return to profitability and growth.
“We have a very experienced team in the business now and have been very fortunate to have had the benefit of Sean Quinn’s experience. We’ve made significant investment in staff and will be commencing a rolling plant and equipment reinvestment programme in the coming months.” 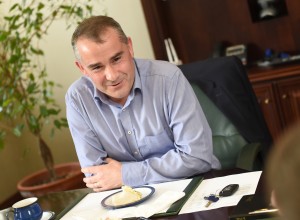 Mr McCaffrey continued: “We were delighted at the turn-out we recently had as we launched our graduate programme which I think demonstrates the importance of this business to the local economy.”

Advertisement
The Construction Industry Supply (CIS) business has its roots in what was the original business of the Quinn Group, founded by Sean Quinn in 1973.  QIHL control much of the old Quinn Group facilities near Ballyconnell and its UK distribution facility in Rochester, Kent handles bulk cement export to the UK.
Another division, Quinn Packaging, is one the of the largest and most diverse food packaging manufacturing operations in Ireland or the UK.
An indication of QIHL’s importance to the local economy was the Graduate and Apprenticeship scheme relaunchd in July as the company seeks to re-establish itself as a major economic driver in the Fermanagh area.
Over 150 young people attended the Graduate and Apprentice Open Night with eight graduate and seven apprenticeship positions on offer. The majority of these positions have now been filled.  The company has always had a tradition of bringing young people through the ranks and given its growth since being re-established in 2014, management felt that the time was right to re-introduce what has been a successful programme in the past.
Meanwhile, the company is also in the process of significantly enhancing its in-house Building Information Modelling (BIM) capability which will be deployed in support of its building and construction product range across the UK and Ireland.