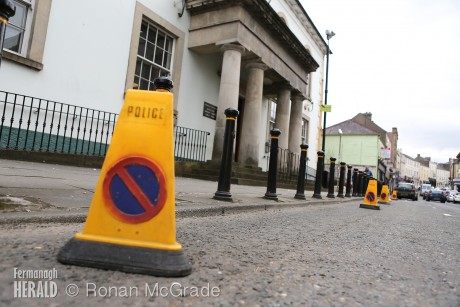 A 34-year Fermanagh man who over a two week period stole a bottle of vodka on five occasions from the same Tempo shop has been convicted at Enniskillen Magistrates Court.

Michael James Boyd, of the Diamond, Tempo was also convicted of the theft of a bicycle, groceries from Tesco, stealing a bottle of wine, stealing a further bottle of vodka from the same Tempo store and various motor offences, including drink driving.

On August 26, 2014 at 3am Boyd entered Tesco in Enniskillen with an empty Asda bag and staff alleged he put several items into the bag in the off-licence, despite being told he couldn’t buy alcohol at that time. Staff waited at the entrance until Boyd walked towards the exit and found him trying to leave with food and alcohol and valued at £35.50. The items were recovered, but later on a member of staff reported that his bicycle worth £150, had been stolen. CCTV showed the defendant take the bicycle parked outside the store. When police searched the defendant’s house the stolen items were identified and when interviewed the defendant admitted the thefts. When shown the CCTV Boyd had no memory of where the bike had gone as he had been intoxicated at the time.

On October 21, 2014 police responded to a report from security staff at Asda in Enniskillen. They said Boyd had concealed a bottle of wine and left the store without paying. When challenged by security staff it was retrieved. When interviewed by police the defendant said he put it in the waist of his trousers, but gave it back as he had “changed his mind”. The wine was fit for resale.

On January 6, 2015 police were on mobile patrol in Derrygonnelly when they saw a black Vauxhall Corsa parked in the forecourt of the spar shop. Shortly after they saw a van pull up beside the car and two males get out, one of which was Boyd. He opened the bonnet and told police it was his car and it had broken down. He explained that the other male was helping him. Officers noted a smell of intoxicating liquor, Boyd’s eyes were glazed, his speech was slurred and he was unsteady on his feet. He failed a preliminary breath test and was arrested. An evidential reading of 82mg was obtained at the station. During interview Boyd admitted drink driving, along with having no insurance or driving licence.

On March 20, 2015 police received a call of a theft from Costcutter in Tempo. The owner confirmed that Boyd had hidden a 70cl bottle of vodka worth £13.79 under his clothes. When police arrived at the defendant’s address they saw two bottles of vodka in the living room, one with a £13.79 label. Boyd admitted taking the bottle and it was found unfit for resale.

In five separate incidents between May 15, 2015 and May 28, 2015 the defendant stole a litre of Smirnoff vodka from Costcutter in Tempo, worth £99.95 in total. When reported on May 28 police called at Boyd’s home and found five empty bottles of vodka. The defendant admitted he had taken them from the top shelf in the store.

Defence solicitor John Quinn explained that Boyd was discharged from the Tyrone and Fermanagh Hospital on August 10 after spending 11 days there and highlighted his mental health problems and issues with alcohol dependency. Mr Quinn said the incidents were largely linked to alcohol.

District judge Nigel Broderick noted that Boyd’s lifestyle appeared to have “spiralled out of control over the last year”. The judge said he had “every reason” to send him to prison, but noted his mental health problems and alcohol dependency and decided to adjourn sentencing for a period of 12 weeks until November 16 for a further pre-sentence report. Mr Broderick added the conditions Boyd continue to attend with the community psychiatric service at the South West Acute Hospital and attend with the community addiction team.