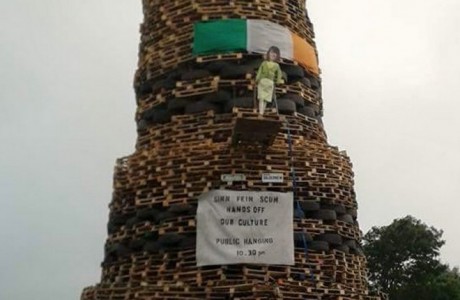 The appearance of an effigy of former Sinn Fein MP Michelle Gildernew, understood to be on a bonfire in Moygashel, has caused outrage.

The mother-of-three has branded the act as a “hate crime” and called on the PSNI to investigate.

The effigy, which is understood to have appeared on a platform on the pyre on Saturday evening, was accompanied by a sign stating ‘Sinn Fein scum, hands off our culture. Public hanging 10.30pm.’

A photo of the bonfire was posted on social media by Moygashel Sons of Ulster Flute Band on Saturday night with the caption: “Legendary already. Good to parade up and play whilst this beast was lit!! Stay safe everyone and have a great 12th celebration…” The image from the bonfire site outside Dungannon has since sparked a backlash on social media.

Ms Gildernew, who lost her Westminster seat to the UUP’s Tom Elliott in May, said she was “absolutely disgusted” by the effigy, tweeting, “My children are 13, 10 and 6. Do they ever wonder what this does to them?”

In a lengthy statement, the Brantry woman stated: “When are we going to see some courageous leadership from political unionism and the Orange Order when it comes to this hate filled practice of burning of effigies, flags and election posters on bonfires?

“These are hate crimes and should be rigorously investigated as such by the PSNI. It is unacceptable for the PSNI to hide behind the stock response that they need community support in order to tackle these type of crimes. They are being paid to prevent and stop crime. It’s time they stopped facilitating the litany of lawbreaking associated with the annual bonfire season.

“Not satisfied with insulting the entire nationalist community by burning our national flag and candidates’ election posters the organisers of these bonfires have now taken to burning effigies.

“A disgusting display of bigoted sectarianism is the bonfire at Moygashel depicting an effigy of myself accompanied by a message declaring it to represent a public hanging. It also makes reference to a quote by former Ulster Unionist Leader, Tom Elliott when he referred to Sinn Féin voters as scum.

“With that kind of leadership is it any wonder that these neanderthals think this type of insult is part of their culture.

“The Orange Order also claims that bonfires are an important part of protestant culture and should be welcoming to families. How can these displays of naked sectarianism be welcoming to anyone?

“If the Orange Order and political unionism are sincere about wanting nationalists to respect their culture then they need to address the ‘bigotfest’ that bonfires have become. They also need to come out unambiguously in their condemnation of these hate crimes by assisting the PSNI in identifying those responsible.”