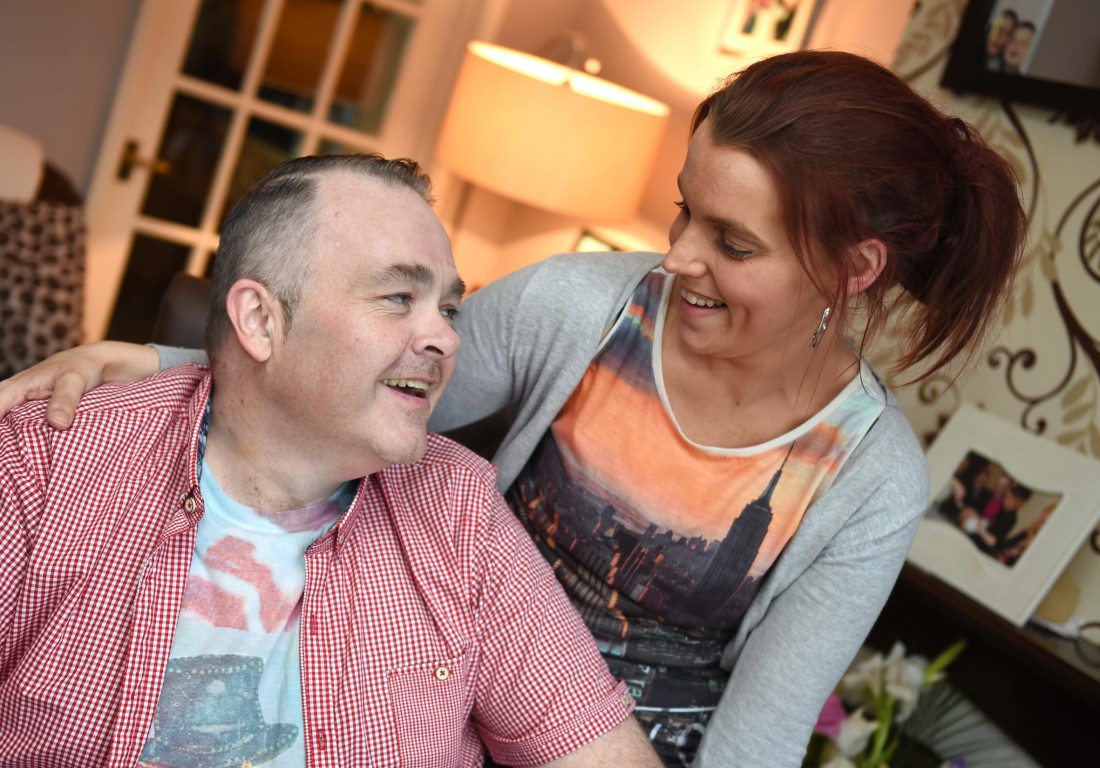 Anthony McBrien, in relaxed mood at home, shares a joke with his partner Lisa Cassidy who has helped him with his recovery RMGFH163

WELL-KNOWN country singer Anthony McBrien has said he is ‘lucky to be alive’ after becoming seriously ill while alone at his home.

The Derrylin man, who now lives in Enniskillen, was struck by kidney failure after waking up alone at his bungalow on the Sligo Road at the beginning of the month. Now, after a terrifying ordeal, he is back recovering at home.

His partner, Lisa, was out of the house with her parents, Jimmy and Kate.

The 44-year-old woke up with what he described as similar to ‘pins and needles’ in his right arm and leg. And he knew it didn’t feel normal.

“I lost all control of my body functions. I was sweating and the bed was just soaking with sweat. The sweat was dropping off my ears and my nose and I couldn’t move the leg at all.

“I thought how am I going to get out of the bed, how will I get my phone?”

He crawled out of bed to get to the phone, and after around 30 minutes Anthony was able to reach it and make contact with his partner Lisa.

Along with her parents, Lisa arrived home to find him in ‘bad, bad shape’. The doctors would later tell him that things would have been much worse had he not been able to reach them.

They called an ambulance who brought Anthony to the South West Acute Hospital where things continued to deteriorate.

“My kidneys had totally failed,” Anthony went on, “The bloods came back and my blood pressure had dropped rapidly. Everything was going totally wrong, to the point where it got very serious.”

He had suffered a heart attack around five years ago, but compared to this, he said, it was ‘like a head cold’.

“They moved me to intensive care. I was constantly in a daze: All that came through my head was: ‘Am I going to die?’

By the sixth day in intensive care, however, things began to feel more normal. By the ninth, Anthony was back at home.

“Only for Lisa and her parents coming back that day, and them getting the ambulance then it’d be a different story. The hospital too, I haven’t even got words to  describe the care that they gave me. Even down to the cleaners coming down and saying ‘hello’ to me. Those things mean a lot.”

Out a week today, Wednesday, he hopes that he can be back on the stage in September. And he thanked all the well-wishers.

“Hopefully it’ll be September time that I’m back playing music, I’ve a date on the 25 September in Belfast and I’m aiming to get back on the stage for that.”