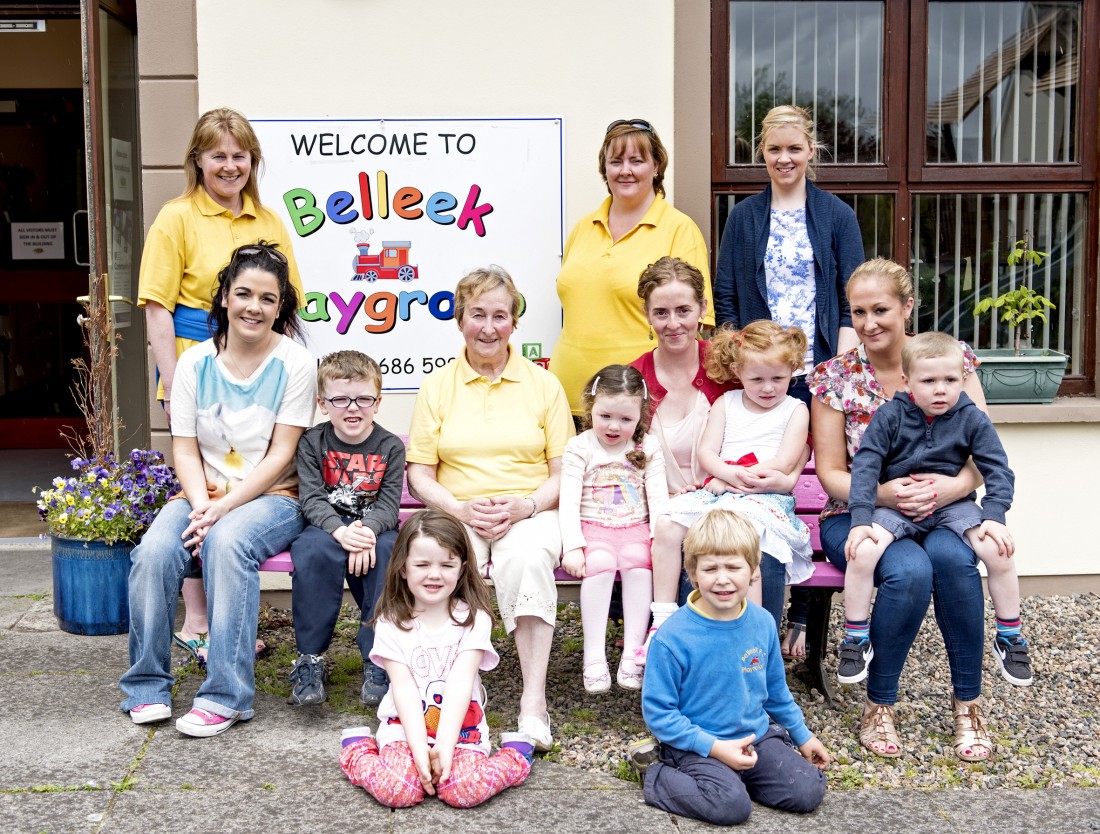 Retiring playgroup leader Edith McBride with two of the staff members and a few of the last parents and children to benefit from her years of nurturing experience.

THIS WEEK marks a special occasion for one of Belleek’s best known citizens – Edith McBride, who is retiring as the leader of Stepping Stones playgroup after 36 years.

75-year-old Edith, who joined the playgroup as an assistant in 1979 before becoming leader in 1988, had an emotional day at playschool on the Old Station Road on Monday as parents, staff and children bid her farewell.

Edith, originally from Ballyshannon but living in Belleek since she was 14, has seen up to three generations through the playschool in the village.

Back in 1979, there were 18 children and the founding members were told by naysayers that the playgroup ‘wouldn’t last’. But, 36 years on and Edith can testify to what has become a hugely important part of the community
“Back at the beginning there wasn’t as much funding available as there is now,” she told the Fermanagh Herald, “Everybody had to pay and there were no funded children. At the minute we have nine mothers coming in with children – who were here themselves as pre-school children and that has happened over the last five or six years where you’d have the second generation coming in.

“It is strange but you get used to it.”

The work of staff, under the guidance of Edith, was recognised in March last year when they received an ‘outstanding’ accolade in an Education and Training Inspectorate (ETI) inspection.

“I think it’s very important to have this in the community,” Edith continued, “it was said by people at the start ‘Ah it’ll never last’ but it has been 36 years and it’s going from strength to strength.

“I don’t know if you asked the children what they’d say but I’d think they’d have made a lot of friends and they’ve become separated from their parents so it’s a good lead-in for school. They’ll have become a little more independent. After coming to us they’ll wave goodbye to the parents easily.”

Asked what she would miss the most, Edith didn’t hesitate in saying, ‘The children!’, before adding: “But you have to retire sometime.”

On Monday, June 29, parents, staff and children gathered to give Edith a real send-off with cake, presents and hugs.
Married to George, Edith has five children: Geri, Roderick, Douglas, Stephen and George. And as for plans for retirement?

“We’ll do a bit of travelling, but not just immediately. We don’t have to fit it in in July or August any more. We’ve a daughter in Australia and we’ve been over two or three times so we’ll get over again. I suppose we’ll take it as it comes.”