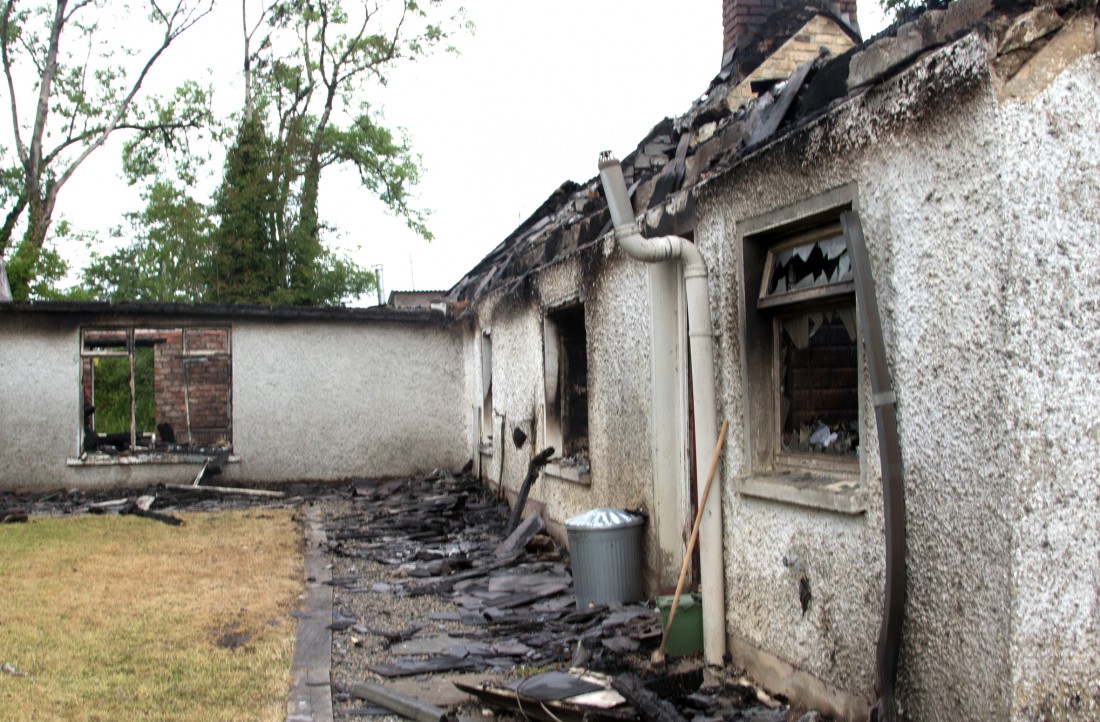 The fire caused extensive damage to the house

A ROSLEA family are counting the emotional and physical cost of a fire that completely gutted their cottage home, which itself dated back to 1790.

The McCabe family’s Corranny home, was left a gutted ruin after what has been described as an accidental chip-pan fire.

The Fire Service responded to call at 9.20pm on Thursday past, and the incident was dealt with by 12.30am.

Speaking to the Fermanagh Herald this week, Patrick and Lisa McCabe said that the loss of the family home has been overwhelming. At the time, Lisa had been kayaking with her children.

It is understood that Patrick had left the chip-pan on before heading over to a friend’s studio next door, when the pan caught fire. By the time he heard the alarm, it was too late.

When Lisa arrived on the scene, she was held back by emergency services as she watched firefighters struggle to douse the flames that engulfed her home. Her children, Jordan, Caitlin and Faelan
grew up in the house.

From her perspective, as well as losing the house, it was the loss of personal possessions that really hit home with Lisa, who has lived at the house for almost two decades.

“I’m from America: I lost all of my childhood photos. The most important thing was my collection of recipes that I had from my grandmother and my aunt. I don’t know why that was the hardest but it seemed like so many memories up in smoke. I also had my family tree. The last time I sat with my grandmother she helped me make a family tree and that was… I don’t know how many years ago that was… but that’s gone.”

The support, however, has been huge from the local community.

“I have never experienced such love and support and community. I don’t know that I would have got the same response in America: We have great friends there but this is a community. People from Clones, Lisnaskea, Roslea, Fivemiletown everywhere: I was overcome.”

And while the loss on both an emotional and physical level has been huge, Lisa admitted that it could have been worse had someone been in the house at the time.

“The thought of having to deal with a funeral as well. The house was in itself a death, but it could have been so much worse.”

The house wasn’t insured, so the family plans to fund-raise in an attempt to rebuild it.

“There’s no other option: It’s a family tradition, a home. It goes back so far. I couldn’t live with myself if I didn’t rebuild it in some way, so that’s my goal. If I could thank the entire community
that is American and Irish and all their love and support. My vocabulary is so limited, I don’t know what to say except thank you.”

The family is in the process of starting a gofundit.com page.