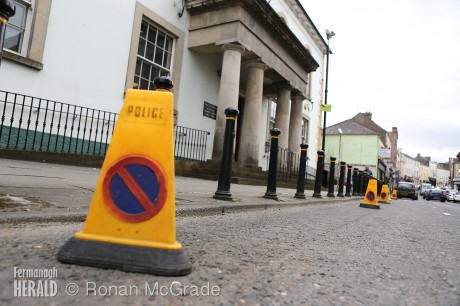 A 19-year-old Enniskillen man who ran off from police who suspected him of drink driving, has been fined £250 and given 10 penalty points.

Niall Johnston of Windmill Heights was convicted of being in charge with excess alcohol in breath at Enniskillen Magistrates Court. The prosecutor outlined that on April 26, 2015 at 3.10am police were on mobile patrol  in the Wellington Road area of Enniskillen heading towards Henry Street when they were drawn to activity at the Castle carpark. They saw a blue vehicle with a number of people standing around it. They witnessed the defendant standing at the driver’s door.

Police observed from a distance of 40 metres and saw the defendant staring at them, appearing to be waiting for them to leave. Police then entered the carpark and saw Johnston standing by a large tree. When they went to approach him and his companions the defendant ran across the playing fields in the direction of the Lakeland Forum.

Officers called for assistance to locate the missing defendant. Police observed that there was frost on the car roof, but that the windows were defrosted and the bonnet was warm. Upon inspection they saw that two people in the vehicle were intoxicated and conducted a search of the area. They found car keys at the tree where Johnston had been standing and later officers located the defendant hiding under a trailer in the Lakeland Forum carpark.

Johnston was brought to Enniskillen police station where he gave an evidential reading of 45mg, 10 over the limit. The defendant was interviewed on April 29 and admitted the car and car keys were his. He gave a no comment interview thereafter.

District judge Nigel Broderick noted the defendant had a very poor record for someone so young, but defence solicitor Emer Cox highlighted to the court Johnston’s last offence was a year ago and he had matured significantly in that time.

The defence explained that on the night in question Johnston had been out with friends in Enniskillen and had been attempting to get a taxi home, but was having difficulties. Ms Cox claimed however that Johnston had not driven the vehicle, nor had any intention to drive it. The defence accepted Johnston’s behaviour in running away from police had not helped matters, but noted his guilty plea at the first opportunity.

Ms Cox told the court Johnston was a provisional licence holder, who lived at home with his mother and sister, for whom he was the primary carer. She added that the defendant had no points on his licence.

The district judge said that he got the impression alcohol was a feature of Johnston’s offending. Mr Broderick said had there been any evidence that the defendant had been driving or was going to drive the vehicle he would have dealt with him more severely. He told Johnston however  that running away from the scene and throwing away his keys had done him no favours. He issued the defendant with one final warning:

“You’re amassing a lengthy record for someone so young. Continue to offend and the penalties will be increased each and every time.”