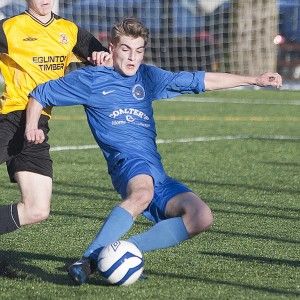 A goal from Kyle Coalter helped Ballinamallard get back into the tie against Cliftonville Olympic.

The lottery of penalties put paid to Ballinamallard Reserves George Wilson Cup bid at the semi-final stages in Ferney Park.

Scott Robinson’s charges were hoping to make it to a second Wilson cup final in succession, but the game finished two apiece after extra time and Cliftonville Olympic progressed after winning the penalty shoot-out 5-4.

The game had started promisingly for the hosts, with Andy Little firing home just nine minutes into the tie.

However that lead was short-lived with Olympic equalising a minute later.

The Belfast side then went on to take the lead and went in at the interval with a 2-1 advantage.

The Mallards had the better of the exchanges at the start of the first half and levelled it up again with an effort from Kyle Coalter.

Despite the best efforts of the sides, that’s how it finished after 90 minutes and after extra time the sides were still deadlocked.