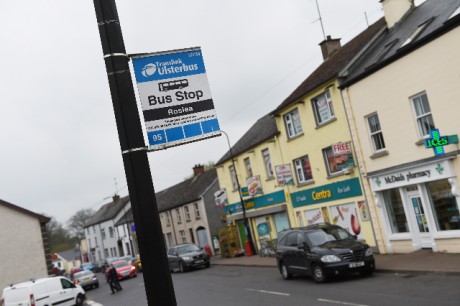 THE THREAT to the rural Roslea to Enniskillen bus service could have a devastating impact on those living in the village, local people have said.

While a strike threatened by Unite the Union for today – Wednesday – has been called off, it’s hoped that frontline services like the Roslea to Enniskillen bus, could be saved.

Unite the Union said that Translink bosses have put proposed cuts on hold.

At present the 95c bus operates Monday to Friday, bringing users in in the morning, and home from Enniskillen in the evening.

It also stops at Coranny, Ballagh cross roads, Donagh and Lisbellaw to Enniskillen.

On the return journey, from Enniskillen, it stops at Lisnaskea, Donagh, Ballagh cross roads and Corranny before ending in Roslea.

Chairman of the Roslea and District Community Forum, Joseph Beggan, said that the community has essentially been left in the lurch over the future of the service.

“We’ve been told absolutely nothing. Apparently last week there was a meeting between our local political representatives and Translink – and we weren’t even informed of it, which we thought was bad form.”

For those who use it, Mr Beggan said, they’ll be ‘very annoyed’.

“We have no industry at all here. All we have are the shops – there was Flynn’s here before – so there’s quite a bit of unemployment here. If they have to be called down to the social security office, or wherever, they’ve no means to get in – that bus would take them.” Similarly, Noreen Callaghan, who operates Roslea Tile and Curtain Centre, was concerned.

“What we’re saying is that the outer reaches of society – Roslea, and Belleek – are the ones that are being cut back. The buses are our link.

“There have been rates increases – everything’s going up, but our services are going down. It’d be generally the older people who don’t have cars – they’re the ones that will suffer.”

Donal O’Cofaigh, campaigns and communications officer, at Unite the Union who have been campaigning to retain services – and were responsible for the proposed strike action.

“Translink haven’t indicated how much of the schedule that they’re looking to remove. Roslea is a very rural, isolated and peripheral community and it’s vital that it retains its public transport provision.

He added: “It’s vital to address the issues of rural isolation and also social inclusion – to enable people to go to the houb towns of Enniskillen and Lisnaskea. This is an important service for a rural community that’s already suffering the effects of the recession, so it’s important that we stand up for it.”

“The recent public consultation on bus services closed at the end of April.

“Following a meeting with the Transport Minister, Danny Kennedy MLA and the UNITE Trade Union last week, Translink put on hold the outcome of their recent consultation process to enable members of the UNITE Trade Union an additional three months to produce an alternative set of efficiency proposals for consideration

“We look forward to discussions with union officials to ensure Translink can be put on a sustainable financial footing for the future.  That is why the management team has been driving forward a change programme within Translink over recent months and we welcome the support of Trade Unions in finding further cost reductions.”